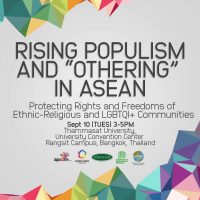 Under the Convergence Space on Human Rights, Democracy, and Access to Justice at the ASEAN Civil Society Conference/ASEAN Peoples’ Forum (ACSC/APF), FORUM-ASIA is proud to co-organise a workshop on: ‘Rising Populism and ‘Othering’ in ASEAN – Protecting rights and freedoms of ethnic-religious and LGBTIQ+ communities’ Date: Tuesday, 10 September 2019 Time: 15.00 – 17.00 Venue: [ Read more ]

HRC 42 Side Event: Transitional Justice in Korea – Jeju Massacre and the Korean War
11:22 am 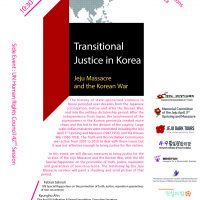 In this event, we will discuss measures to bring justice for the victims of the Jeju Massacre and the Korean War, with the UN Special Rapporteur on the promotion of truth, justice, reparation and guarantees of non-recurrence. The testimony by the Jeju Massacre survivor will paint a shocking and vivid picture of that period. Date: Thursday, [ Read more ] 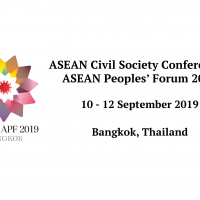 The ASEAN Civil Society Conference/ASEAN Peoples’ Forum (ACSC/APF) is an annual forum of civil society organisations from ASEAN Member States held in parallel with the ASEAN Summit. The meeting is organised by civil society in the country that holds the ASEAN Chairmanship. As Thailand is the Chair of ASEAN for this year, ACSC/APF is to be hosted [ Read more ]

Discussion on the Review of the Terms of Reference (TOR) of the AICHR
2 September 2019 3:11 pm 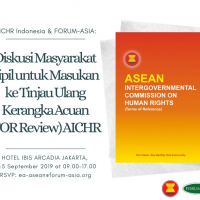 Findings made by FORUM-ASIA through its recent publication on the 10-year evaluation of  the ASEAN Intergovernmental Commission on Human Rights (AICHR) have indicated room for improvement that can be implemented by the regional human rights mechanism to be fully effective on addressing the human rights issues in the region, particularly when it comes to provide [ Read more ]

Mid-Year Review of the Performance of AICHR Indonesia to Promote and Protect Human Rights in ASEAN
2 August 2019 11:36 am 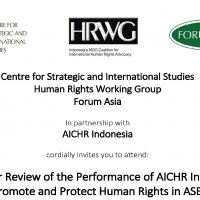 As part of monitoring the work of the ASEAN human rights mechanism, the Centre for Strategic and International Studies (CSIS), the Human Rights Working Group (HRWG), and Asia Forum for Human Rights and Development (FORUM-ASIA) in partnership with the Representative of Indonesia to the ASEAN Intergovernmental Commission on Human Rights (AICHR), wish to organise a [ Read more ] 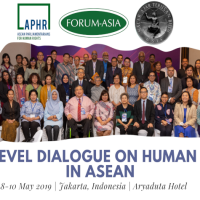 FORUM-ASIA along with ASEAN Parliamentarians for Human Rights (APHR) and Centre for Strategic and International Studies (CSIS) Indonesia organised a two-day meeting to discuss the 10 years evolution of the ASEAN Intergovernmental Commission on Human Rights (AICHR), and how the institution needs to fully function for the promotion and protection of human rights in the [ Read more ]

HRC 41 Side Event – Myanmar: Human rights violations, impunity and militarisation of the economy
1 July 2019 11:58 am 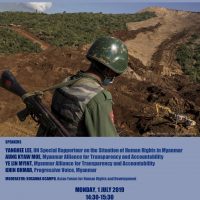 With Myanmar’s weak rule of law, corrupt judiciary and impunity for security force abuses, democratic space is diminishing. Impunity for gross human rights violations has significantly and demonstrably contributed to the validation of deeply oppressive and discriminatory conduct, enabled recurrence of human rights violations and atrocity crimes, emboldened perpetrators and silenced victims. How do [ Read more ] 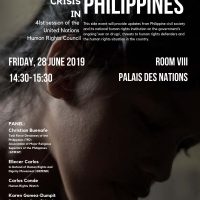 Since the Philippine government initiated its so-called ‘war on drugs’ in June 2016, an estimated 27,000 people have been victims of extrajudicial killings both in police operations and vigilante-style killings. The Philippines has taken steps to shield itself from any domestic or international accountability for the human rights violations in the context of the anti-drugs [ Read more ] 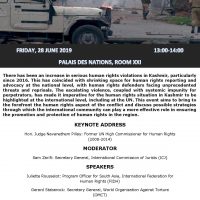 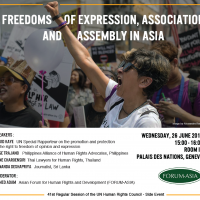 Exercise of the rights to freedoms of expression, peaceful assembly and association continues to be under threat in many Asian countries. These threats include legislative and regulatory restrictions and direct attacks and violence from state actors or non-state actors often acting with tacit support of the state. Situations in Thailand, the Philippines and Sri [ Read more ]