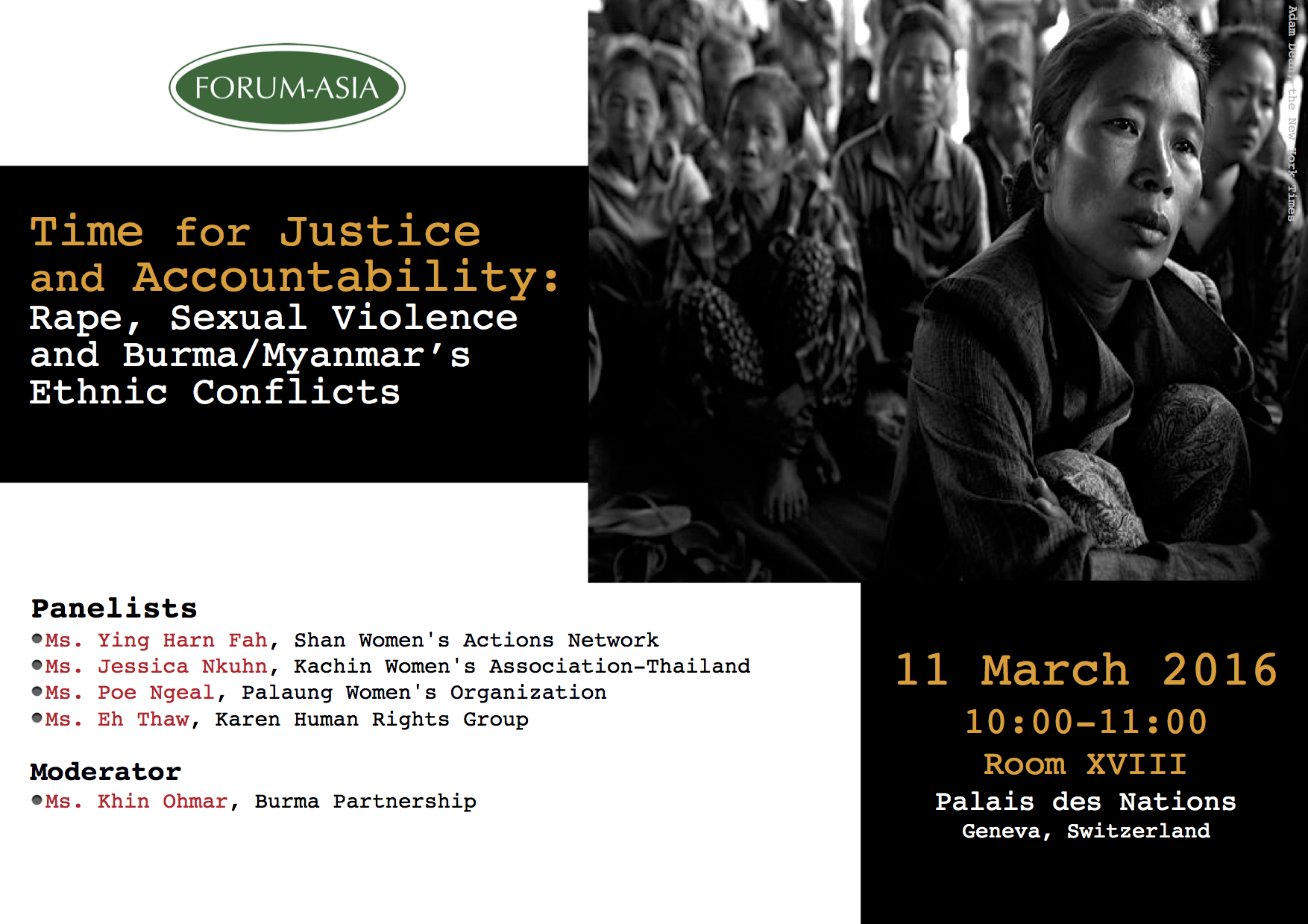 Since the political reform began in 2011, Burma/Myanmar has made positive changes in different aspects, including the historic general election in November 2015, yet many serious concerns remain. The ongoing armed conflict in ethnic areas remains one of the major challenges to meaningful democratic reform and protection of human rights in Burma/Myanmar. The conflict in ethnic areas has displaced tens of thousands of people and affected communities continue to experience severe human rights violations including torture, extrajudicial killing, arbitrary arrest, forced labour, attacks against civilians and the systematic use of sexual violence. Despite the signing of the nationwide ceasefire agreement (NCA) in October 2015, and the subsequent Union Peace Conference (UPC) in January 2016, communities on the ground in different ethnic areas are still suffering at the hands of armed actors, in particular the Burma/Myanmar Army. The ongoing clashes in Kachin, Northern Shan and Kokang Self-Administrative Zone, even after elections, evidently demonstrate that the current government under National League for Democracy (NLD) leadership still has a long way to go to resolve the conflict in Burma/Myanmar.

Among the multifarious forms of serious human rights violations in Burma/Myanmar, rape and sexual violence committed by Burma/Myanmar Army often receives less attention. This is evidenced by exclusion of women and abuses against women throughout the ceasefire negotiations and the UPC. The widespread use of sexual violence and rape by the Burma/Myanmar Army has been documented by numerous human rights organizations over the course of the past decade, including for the duration of the peace process since 2011. A January 2014 report by Women’s League for Burma (WLB) documented 104 cases of sexual violence committed by Army soldiers against ethnic minority women in armed conflict areas since the 2010 elections. In a follow up report in November 2014, WLB documented 14 more cases. WLB report states that, “it is clear from the number and geographic scope of these crimes that terrorising civilian populations in ethnic states with sexual violence remains an institutionalised practice of the Burma Army.”

The impunity that the Burma/Myanmar Army enjoys, as enshrined in the 2008 Constitution, ensures that the perpetrators are never held accountable. One salient example is of two Kachin schoolteachers who were found brutally tortured, gang-raped and killed by Burma Army in Northern Shan State. Their bodies were discovered on the morning of 20 January, 2015, the day after the Burma Army soldiers arrived in the village during military operations against the Karen Independence Army. The Shan Human Rights Foundation documented eight more cases of sexual violence committed by the Burma/Myanmar Army between April and November of the same year. So far, no Burma Army officers or soldiers have been brought to justice in any of these rape and murder cases. UN Special Rapporteur on the situation of human rights in Myanmar, Yanghee Lee, in her 2014 report to the Human Rights Council expressed concern over the “high level of impunity for conflict related sexual violence perpetrated by State actors and a lack of transparency in military courts.”

This panel discussion seeks to provide a platform to advance discussions on the past and ongoing rape and sexual crimes committed by Burma Army in the ethnic conflict in Burma/Myanmar, and impunity enjoyed by perpetrators of these crimes. The panel will explore avenues for justice and accountability under international human rights law with the aim to further the discourse and advocate for continued attention of the UN Human Rights Council on Burma/Myanmar.