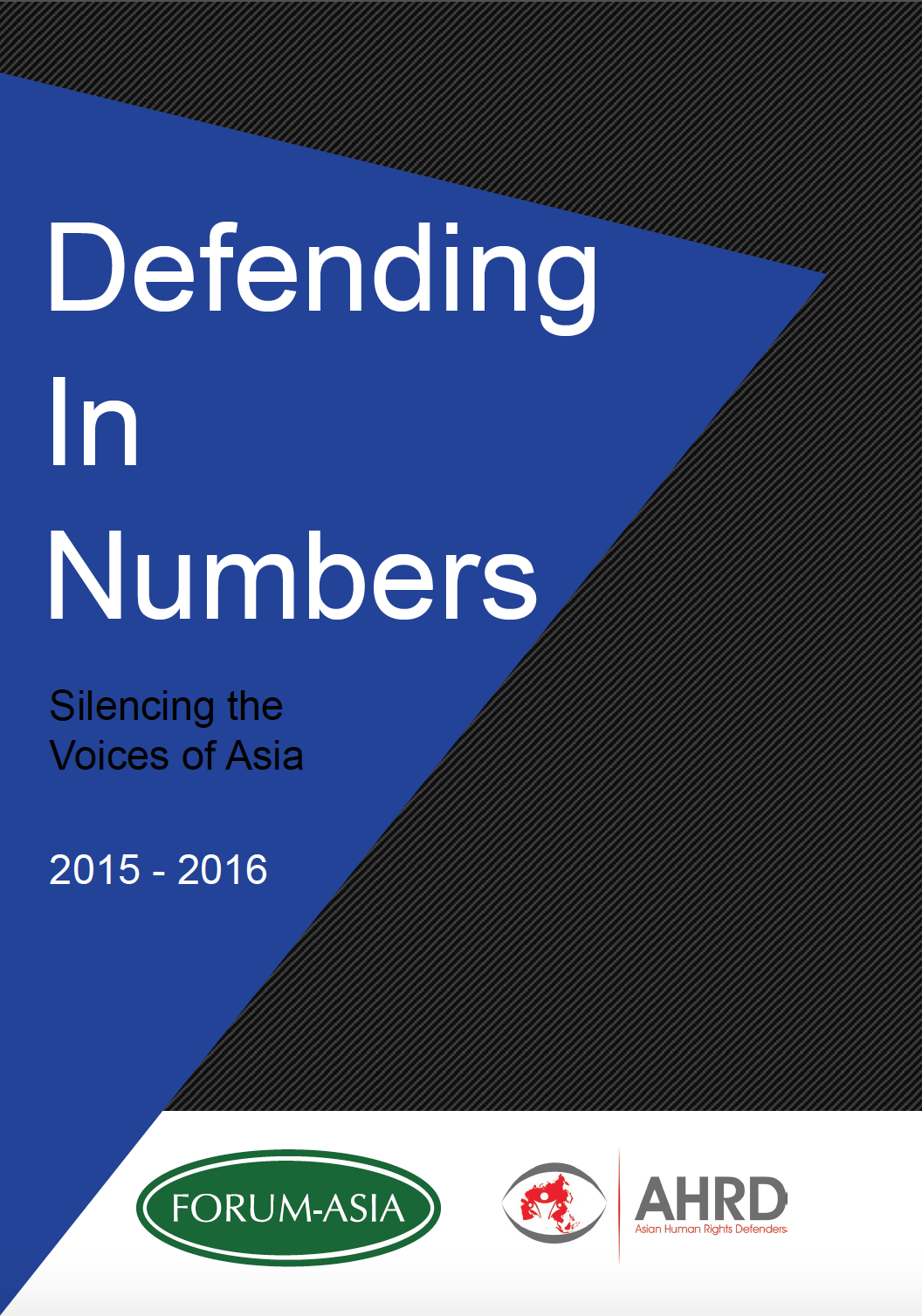 The new Defending in Numbers – Silencing the Voices of Asia 2015-2016 shines a light on the challenging situation of human rights defenders (HRDs) in Asia. Based on documentation by FORUM-ASIA of cases of HRDs, it aspires to identify regional trends and patterns of violations and abuses against HRDs, and to illustrate the restrictive and often dangerous environment in which many of them operate.

Between 2015 and 2016, FORUM-ASIA documented 554 cases of violations and abuses against HRDs, as well as new instances of restrictive legislation and policies affecting civil society in Asia. The documented violations and abuses range from: intimidation; threats; physical assault; arbitrary arrest and detention; criminalisation; judicial harassment; disappearances; death threats; and killings of human rights defenders as well as threats to members of their family.

Since the previous report ‘Defending in Numbers – Mounting Echoes of Muffled Dissent 2013- 2014’, HRDs in Asia continue to face numerous threats and challenges because of their work both individually and collectively. Threats, harassment, criminalisation, trumped-up charges, restrictive legislation and direct attacks are part of their daily lives in many countries in the region. HRDs working in communities, pro-democracy and youth activists and defenders working on freedom of religion and belief are particularly prone to harassment.

Today’s reality, in Asia, is that the safe space in which HRDs work is increasingly shrinking and constricting. This has been demonstrated by: the continued arbitrary application and misuse of laws; use of existing repressive laws; and introduction of new legislation to criminalise legitimate activities of HRDs whilst restricting freedom of expression, peaceful assembly and association. This also includes the rights of HRDs to solicit, receive and utilise resources for the purpose of protecting human rights or to receive funding from abroad. Governments in Asia have gone through great efforts to silence, restrict and discredit HRDs, especially those critical of government policies. In addition, HRDs in the region increasingly face threats from non-state actors, with authorities either being complicit or failing to take action to combat them.

Faced with these challenges, FORUM-ASIA found that defenders are deprived of full access to effective remedies. The judiciary in many countries lacks independence and effectiveness in providing protection for HRDs. The same applies to the National Human Rights Institutions (NHRIs) of the region. They often lack resources to fulfil their role in promoting and protecting human rights, especially the rights of HRDs. Aside from national protection, or lack thereof, Asia is the only region in the world where no regional human rights protection mechanism has been established.

The only established human rights mechanism at the sub-regional level – the ASEAN Intergovernmental Commission on Human Rights (AICHR) – has come under strong criticism as its representatives are State appointed. Since its establishment in 2009, its mandate is still limited to promotional activities, leaving HRDs in Association of Southeast Asian Nations (ASEAN) without adequate protection when their Governments fail to do so.

For the PDF version of this publication click here.