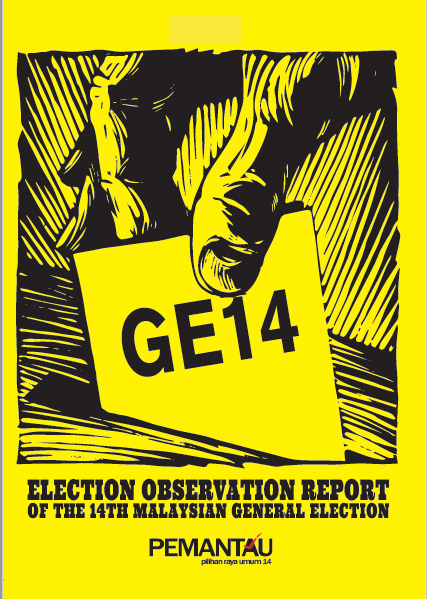 This ‘Election Observation Report of the 14th Malaysian General Election‘ was published by the Coalition for Clean and Fair Elections (BERSIH 2.0). It combines the documentation and monitoring work of BERSIH 2.0 from May 2013 and the observation mission of the PEMANTAU initiative from the dissolution of Parliament on 7 April 2018 until polling day on 9 May 2018.

The PEMANTAU initiative was launched on 30 October 2017, together with SUARAM and Pusat KOMAS. The initiative trained 100 coordinators throughout the country to verify reported incidents in 30 zones nationwide. These coordinators, together with the BERSIH 2.0 Secretariat and Steering Committee, held nationwide briefings and public awareness campaigns to encourage citizens to become PEMANTAU Rakyat. PEMANTAU Rakyat volunteers could contribute by lodging reports of any incidents of electoral fraud or misconduct to PEMANTAU, online, via WhatsApp or through a telephone hotline.

The report explains the methodology of the PEMANTAU initiative and summarises the key findings of the election observation.  SUARAM and Pusat KOMAS have also contributed to the reports on political violence and human rights violations (SUARAM) and racism during the election period (Pusat KOMAS).