For this month’s e-newsletter, FORUM-ASIA talked to Luis de Oliveira Sampaio, Executive Director of Judicial System Monitoring Programme (JSMP), a member of FORUM-ASIA in Timor-Leste. Luis has been a human rights activist since he was a university student. The referendum in 1999 has changed Timor’s history and that was when Luis started working in the human rights field to advocate for a better justice system of the country. 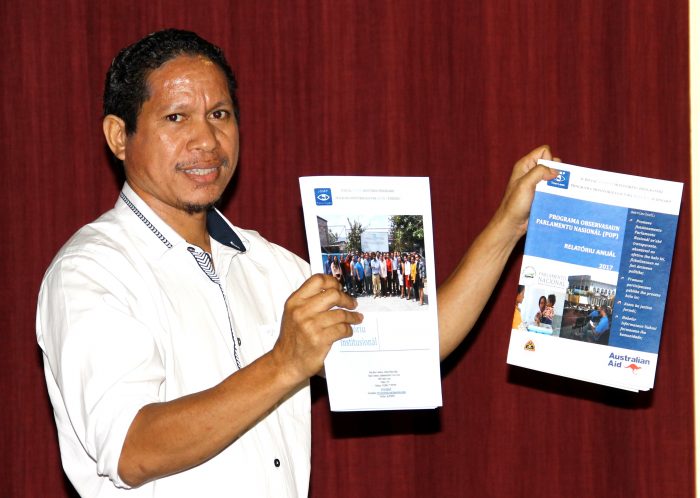 I started to get involved with human right issues since 1999 when the Indonesian Government announced an independence referendum for Timorese people. The referendum was to determine whether Timor-Leste would remain part of Indonesia or to be an independent state. At that time, I was a university student in North Sumatra in Indonesia, and I decided to go back to Timor-Leste to join my friends who also left colleges in most part of Java to help our people vote for independence.

I then joined a movement called ‘Kerja Basis’, which in Indonesian could be translated as ‘working in the community base’. The programme aimed to request everyone to return to their respective district to support the voters’ education of their relatives and older people, so that they can understand the process of the referendum and choose the right option for independence.

However, my colleagues and I were denied entry to our home districts once we arrived in Dili, the capital city of Timor-Leste. The Timorese militias, who were mostly backed by the Indonesian military, had dominated and taken over each district of Timor-Leste. They could kill anyone who opposed them, especially university students that came back from Indonesia to help their people to vote during the referendum.

Later on, I volunteered at a human rights organisation called YAYASAN HAK (Association for Law, Human Rights and Justice). Together with other volunteers and activists, we mobilised humanitarian assistance for refugees and persons displaced by the brutal killings and torture of the militias and military.

The referendum was successfully organised with the assistance of United Nations (UN) on 30 August 1999, and the majority (78.50 %) of Timorese people decided to reject the proposed special autonomy for East-Timor, leading to the independence of East-Timor, now the Democratic Republic of Timor-Leste. After all the terrible experiences, we were finally liberated from Indonesia’s illegal occupation.

I am telling you this story with a memorable sentiment that I recall 19 years ago and today is 30 August, the day that we celebrate our 19 years of victory of the referendum day.

The next year I went back to Indonesia to finish my law school and returned to Timor-Leste in early 2002.

JSMP is one of FORUM-ASIA’s members along with HAK Association since around 2006, but I personally got involved with FORUM-ASIA in 2011 when I attended a human rights defenders forum in Manila. This forum gave me the opportunity to meet with a diverse range of human rights activists who dedicated their lives to work for human rights issues in the region.

All these terrifying accounts of our struggles to gain independence had caused so many innocent deaths, and that motivated me to devote myself to work as a human rights activist until now.

As one of the newest countries in the world, Timor-Leste has so many challenges especially when it comes to human rights-related issues such as: land disputes that involve state, corporate and the community; force arbitrary evictions; judicial interference; abuse of power; corruption in public institutions; gender-based violence; and other human rights issues.

In responding to these above situations, we need people like us to dedicate and commit themselves to working outside of the system and to monitoring the system. We need to make sure that the system works properly to guarantee that all citizens can exercise their rights, and to help women and children, victims of gender-based violence access to justice as guaranteed in the constitution.

This kind of work requires a lot of commitment and can only be done by those who are willing to assist anyone who is deemed to be vulnerable. Having a law degree, I could have chosen to be a judge, a state prosecutor, or a commercial lawyer to work for private companies, but those are not my motivations. I feel more motivated to work outside of the system, which enables me to help people understand the complexity of the justice system and make them familiar with the system so they can be treated equally before the law.

I was not an important actor during the time of struggle, but I think the most inspiring and the memorable moment was the time when I joined other students to return to Timor-Leste in 1999. We left our dreams of finishing studies for going back to Timor-Leste to help our people make the right choice for independence under the extremely difficult situation.

As an individual and a member of the Timorese community, I should be proud of myself, as no one believed that Timorese people could win in the struggle for independence. Eventually, Timorese people prove that nothing is impossible in this world as long as you have the commitment and the will to keep on fighting until the end.

As a human rights organisation like JMSP, it is difficult to influence the decision-making process of the justice system, even though we have provided the evidence-based analysis and recommendations. For example, JSMP’s court monitoring programme suggested that a certain criminal code had hampered the access to justice for female survivors of domestic violence, while in the end both the court and prosecutor did not acknowledge this issue.

Another challenge we face is the people. This includes politicians who are not happy with our criticisms. We are always being accused of working for the third-party’s interests or for raising our voices loudly to get funding from supportive donors.

However, what matters the most for us is the need to continue our fight for creating a better justice system in the country.

To work on the human rights issue is not an easy task and not everyone is willing to put their lives and the lives of their family at risk. Not many are willing to sacrifice their lives for others.  But as human beings, we can not stay calm and ignore any human rights violations, when cases of human rights abuses are occurring every day. Therefore, let’s put our hands together to make every small and little effort to save and protect human rights. Do small things is better than nothing!