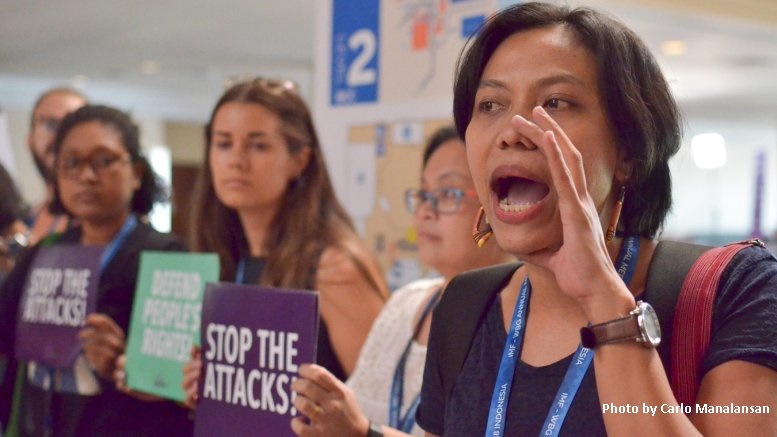 The Asian Forum for Human Rights and Development (FORUM-ASIA) denounces the Indonesian authorities’ disruption of several civil society-led events parallel to the Annual Meeting of the International Monetary Fund (IMF) and World Bank Group (WBG) in Indonesia last week. Those events were aimed at highlighting the negative impacts of International Financial Institutions on the communities and environment. FORUM-ASIA sees the disruption as intimidation towards civil society and violations of the rights to freedoms of peaceful assembly, association, and expression in the country. FORUM-ASIA calls on the Government of Indonesia to respect people’s fundamental rights and to safeguard the principles of human rights in accordance with international standards.

One of the major disruptions was received by ‘The People’s Global Conference against IMF-World Bank (PGC).’ The authorities did not give the permit to the Conference despite the fulfilment of all administrative requirements to hold such a meeting.[1] Furthermore, prior authorisation should not have been a precondition for holding an assembly at the first place as freedom of peaceful assembly is a right and not a privilege.[2] On 11 October 2018, the police disrupted a press conference organised by the PGC condemning such repression, during which several intelligence officers were taking videos and pictures of participants without their consent. One day prior to the meeting, a paramilitary group harassed youth volunteers of the Legal Aid Institute (LBH) Bali and one of the co-organisers, creating fear among the organisers.

Oppression was also faced by other civil society groups. Parallel to the disruption of the PGC on 11 October, six people were detained by the police for participating in a peaceful protest called ‘Gerak Lawan.’[3] On the same day, a seminar organised by NGO Forum was disrupted by immigration officers, who later demanded 20 foreign participants to surrender their passports under the guise of surveillance and monitoring.[4]

These series of oppression add to the long list of arbitrary actions by the Indonesian authorities[5] and affirm that the Indonesian authorities are becoming more intolerant to dissents. These repressive actions clearly violate the rights to freedoms of expression, peaceful assembly, and association that are guaranteed under Article 28E(3) of the Indonesian Constitution and Articles 24 and 25 of the Law concerning Human Rights (Law No. 39/1999).

As one of the state parties to the International Covenant on Civil and Political Rights, the Indonesian Government has failed to live up to its international obligations. It also contradicts its commitments made during the Universal Periodic Review in 2017 to ensure full respect for the exercise of the rights to freedoms of expression, peaceful assembly, and association, including by providing trainings to police and local authorities.[6]

FORUM-ASIA expresses solidarity with the victims and urges the Government of Indonesia to preserve and safeguard its international human rights commitments and to guarantee the non-occurrence of such oppressive intimidation towards civil society.

For a PDF version of the Press-Release, please click here

[1] Indonesia gov’t, police blocks anew People’s Global Conference.
[2] Joint report of the Special Rapporteur on the rights to freedom of peaceful assembly and of association and the Special Rapporteur on extrajudicial, summary or arbitrary executions on the proper management of assemblies, para. 21, A.HRC.31.66.
[3] Komnas HAM Kecam Pelarangan Diskusi Tandingan IMF-WB di Bali.
[4] NGO FORUM ON ADB faces harassment and crackdown from Indonesian Immigration Intelligence forces during a planning meeting in Bali.
[5] HRC36 Oral Statement on the Universal Periodic Review (UPR) of Indonesia.
[6] Recommendation 139.51 and 141.58, which enjoyed the support from the Government of Indonesia during the 3rd cycle of the Universal Periodic Review, 2017.