JOINT STATEMENT: CSOs call on authorities to step up the fight against endemic impunity in Cambodia
1 November 2018 10:30 pm 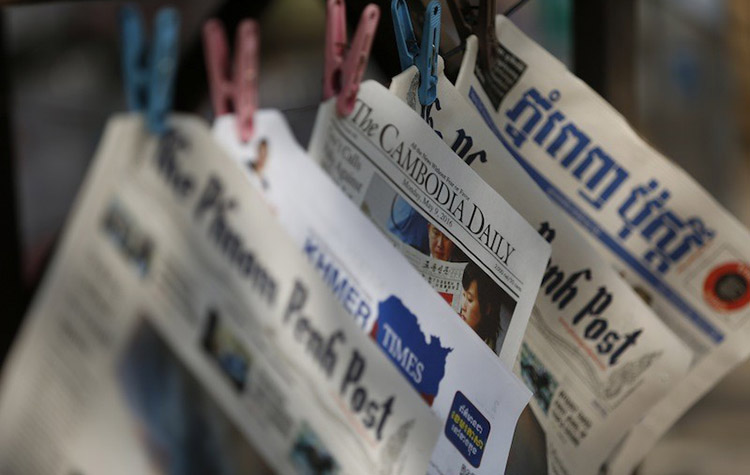 JOINT STATEMENT: CSOs call on authorities to step up the fight against endemic impunity in Cambodia

Phnom Penh, 1 November 2018 – On the occasion of the International Day to End Impunity for Crimes against Journalists, we, the undersigned civil society groups and communities, condemn the ongoing impunity enjoyed by perpetrators of crimes against journalists and human rights defenders in Cambodia, and urge the authorities to take immediate action to ensure the effective, independent, and transparent investigations of all crimes.

Since 1994, at least 13 journalists have been murdered: Thou Char Mongkol, Nun Chan, Chan Dara, Thun Bun Ly, Chet Duong Daravuth, PichEm, DokSokhan, OuSaroeun, ChourChetharith, Khim Sambo, Hang SereiOudom, Suon Chan and Taing Try. In all these cases, the victims were killed because of their work. Furthermore, at the time of their deaths 12 of the victims were engaged in activities that posed a direct threat to powerful individuals within the Cambodian elite: five worked for media outlets critical of the ruling party,while seven were investigating and reporting on allegations of corruption by high-level individuals in the government and military.

In 11out ofthese13 cases, no one was convicted for the murders;[1]inseven, no suspect was arrested or interrogated.[2]For instance, the killers of Thou Char Mongkol, the editor-in-chief of Antarakum newspaper who was found unconscious with a fractured skull on a road in June 1994 after having published several articles accusing government and military officials of corruption, were never identified by the police. Instead, they claimed he was the victim of a traffic accident. Similarly, even though Dok Sokhan was shot dead by two soldiers in July 1997 after having taken photos of them looting a market, no one has been arrested or charged. Another illustrative example is that of Khim Sambo, a journalist at Moneaseka Khmer, a daily newspaper aligned with the opposition party, who was shot dead by two men on a motorcycle in July 2008. 10 years later, calls for an independent commission of enquiry have been ignored and those responsible have not been brought to justice.

In the two cases where a trial took place, serious concerns remain. Suon Chan was reporting on illegal fishing activities when he was beaten to death by a group of fishermen in January 2014. In his case, only one of the perpetrators was arrested and convicted. Five other suspects were tried in absentia and given a 13-year sentence. They were never arrested. In the other case, that of Taing Try, who was found dead with a bullet in his forehead in October 2014, two of the three perpetrators who initially confessed to the murder were released on bail after the third claimed to have acted alone.

Crimes against journalists carry with them a particular menace. Journalists perform an indispensable duty in the societies in which they work; they are the eyes, the ears, and the voice of the people. Journalists are responsible for reporting events as they happen, writing analysis and commentary to support lively expression and debate. Independent journalism plays an essential role in holding those in power accountable and makes a vital contribution to a just society. When journalists are targeted by violence for what they write or report, freedom of expression is stifled and replaced by self-censorship and fear; the public is denied information;  and the powerful cannot be held to account. When the state fails to investigate and punish violence against journalists, it sends the chilling message that attacks on journalists are permissible.

In the last two years, while journalists have not been killed, they have been targeted with judicial harassment, including trumped-up charges, and media outlets perceived as critical have been forced to close.

Impunity in Cambodia is not limited to attacks against journalists. The lack of effective, independent and transparent investigations into the deaths of environmental activist Chut Wutty, trade unionists Chea Vichea and Ros Sovannareth, and political analyst Kem Ley further illustrate the pervasive culture of impunity that prevails in Cambodia. The cases outlined above represent a fraction of the thousands of instances of abuse perpetrated against journalists, human rights defenders, political opponents, trade unionists, activists and individuals that have gone unaddressed by the institutions tasked with protecting the rights of Cambodians.

We condemn the rampant impunity that harms Cambodian people and society and demand justice for all those whose rights have been cast aside. We call upon the authorities to prosecute perpetrators of crimes committed against journalists and human rights defenders by undertaking effective, independent, and transparent investigations and prosecutions in accordance with international human rights standards, including the International Covenant on Civil and Political Rights, the United Nations Plan of Action on the Safety of Journalists and the Issue of Impunity and the United Nations Economic and Social Council’s updated set of principles for the protection and promotion of human rights through action to combat impunity, and to restore the integrity of the Cambodian legal system.