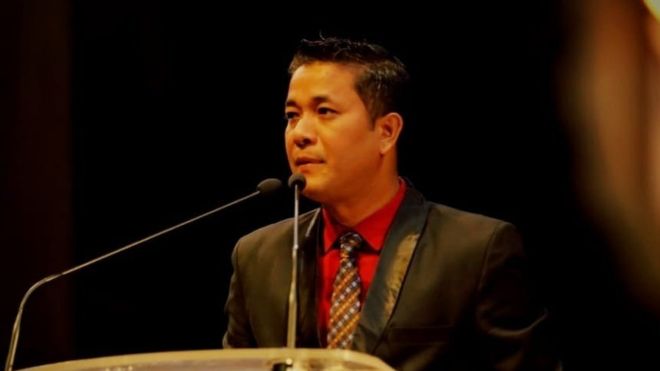 (Bangkok/Kathmandu, 26 December 2018) – Kishorechandra Wangkhem, a journalist from Manipur was sentenced to one year in prison for posting a video on social media criticising the Bharatiya Janata Party(BJP)-led Government. The Asian Forum for Human Rights and Development (FORUM-ASIA) strongly denounces the unlawful sentencing of Wangkhem under the preventive detention clauses treating the journalist as a national security threat.

Kishorechandra Wangkhem was arrested on sedition charges on 20 November for posting a video on Facebook critical of Chief Minister N Biren Singh and Prime Minister Narendra Modi. He was produced before a Magistrate and on 26 November he was released on bail granted by the magistrate stating that his statements did not seem to be an attempt to disturb peace. The order said it is a mere expression of opinion against the Prime Minister and Chief Minister of Manipur, which can not be equated with an attack to invite people to conduct violence and topple the Government of India or Manipur.

Having failed to charge Wangkhem under Indian Penal Code, the Manipur police took the drastic step of invoking the National Security Act (NSA) 1980 against Wangkhem and detained him again on 27 November. An administrative board constituted under the NSA arbitrarily sentenced him one-year jail term without providing him any legal representation. On 14 December, the State Government approved the detention order under NSA and fixed the detention for a period of one year from the date of detention. When a Magistrate did not find the journalist’s action worthy of jail term even under the  Indian Penal Code, it is shocking that the advisory board under NSA curbed Wangkhem’s liberty without any regard for the law.

On 16 December, Delhi police detained 35 members of Manipur Students’ Association, Delhi (MSAD) and Delhi Association of Manipur Muslim Students (DAMMS) while they were proceeding towards the Manipur Bhawan in New Delhi with the intention of a peaceful protest.

The draconian provisions of NSA violate several international human rights standards. NSA allows the State to detain anyone for up to a year without framing any substantial charges. It gives power to the Central Government, State Government, even the Commissioner of Police or District Magistrate to detain anyone and put them under extended periods of preventive detention to those whom it suspects to be a threat to public order. The matter is brought before an ad hoc advisory board where the detainee is not provided with any fair trial including having legal representation. As the record shows, such advisory board is reluctant to act against the State and it directly places detention orders, primarily on the ground that it is executive and is best positioned to assess threats to public order.[1]

Preventive detention under NSA is an extraordinary provision and its use even in peacetime has been roundly criticised by rights activists in India. Many times NSA has been invoked repeatedly against the same person as soon as the person is released after serving the jail term. With no safeguards in place, the provision has been grossly misused to target journalists, human rights activists, peasants, trade unionists and protesters critical of government actions and policies. Arrests of anti-Sterlite protestors in Tamil Nadu, detention of Dalit leader Chandrasekhar Azad in Uttar Pradesh and peasant leader Akhil Gogoi in Assam are some politically motivated arrests made under NSA in past two years. The law has been used largely by government authorities to silence inconvenient critics and opponents by slapping vague accusations on them and without the necessity of having to prove them at trial.

FORUM-ASIA is concerned over the repeated attacks and crackdown on dissent in India seen as the world’s largest democracy. FORUM-ASIA strongly urges the Government of India and the Government of Manipur to release Kishorechandra Wangkhem and remove the charges against him under the NSA. FORUM-ASIA further urges the Government to demonstrate its commitment to human rights reform by repealing the widely misused and repugnant laws such as NSA, preventive detention clauses under various legislations, and ensure press freedom and the safe environment to protest and express dissent. The Supreme Court of India has rightly acknowledged dissent as the safety valve of democracy, and it is time for the Government of India to respect and protect it.