‘Civil and political rights, such as freedom of expression and association, cannot be fully realised unless you have economic, social and cultural rights safeguarded.’ – Interview with Dr. Suresh Kumar Dhakal, Newly Elected Executive Committee Member of FORUM-ASIA
9 January 2019 11:42 am

For this month’s e-newsletter, FORUM-ASIA talked to Dr. Suresh Kumar Dhakal, one of the newly elected Executive Committee Members of FORUM-ASIA and the Chairperson of Community Self Reliance Centre (CSRC), a member of FORUM-ASIA in Nepal. As a human rights defender, Suresh shared with us his experiences with the land rights movement, difficulties faced by the landless and smallholder farmers, and the linkages between civil and political rights, and social, economic and cultural rights in Nepal. 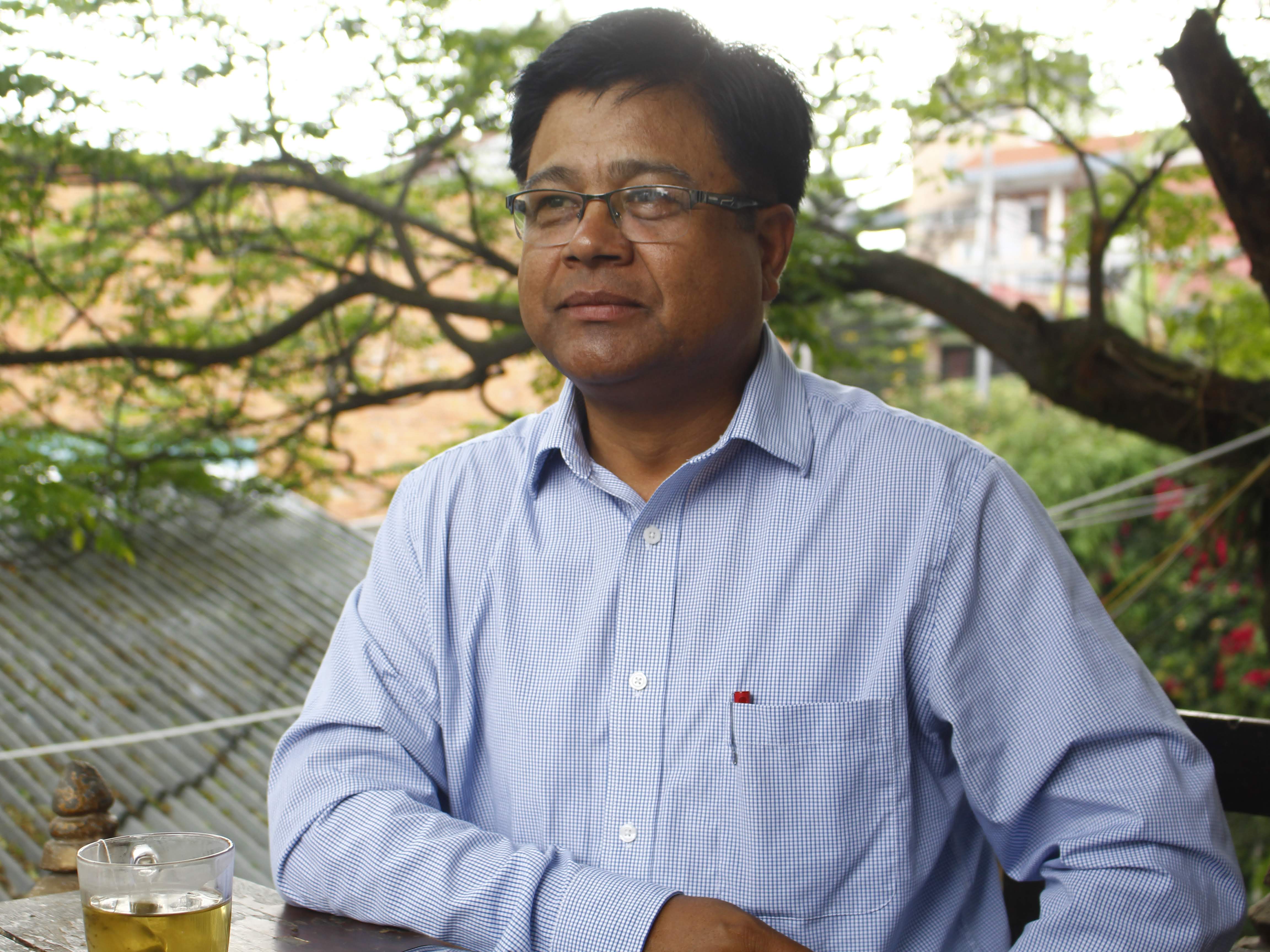 I was involved in student politics since my high school days. It was then opposition politics. Before 1990, all political parties were banned in Nepal, and we were demanding political reform, freedom of association and democracy. It was at that time I started being part of the political movement, and in the process, I became aware of the ideas of rights, equality and liberty.

In 1993 the Community Self Reliance Centre (CSRC) was established, which came from a small movement in the villages, and is now spreading across the country. Since its establishment CSRC has been at the forefront of the rights campaigns in Nepal. CSRC is one of the members of FORUM-ASIA. I used to represent the organisation, earlier as the Vice-chair and later as the Chair of CSRC. At FORUM-ASIA’s General Assembly meeting this year, I was elected as a member of the Executive Committee.

I come from a lower-middle class family with basic facilities, and I was socialised in left-wing politics. That taught us that the reason why there are people who are rich and poor is because of exploitation, so we have to correct that. The resources should be re-distributed, so the poor people can at least have access to basic and fundamental rights, including the rights to: housing, food, education, and health. That is how I continue fighting for this.

Another factor that motivates me is my background of anthropological training. It is like a back-up for me to speak up for the marginalised people, and to understand that human rights include economic, social and cultural rights and the right to be included. My own experiences in political activism, my training in anthropology, which always taught me to respect different cultures and to work for social justice, and my involvement in the lands rights movement exposed me to a wide range of problems and violations of rights. For example, my organisation used to visit different parts of the country, and see how poor and marginalised farmers are denied their rights. We have to identify with them and fight for them.  From all of this, I get a cumulative inspiration for the movement.

Now I am teaching at the university, and meanwhile I am involved in the movement. What I am trying to do is to link academic knowledge and training to movements and policies, so they can be more effective based on evidence.

Throughout the years I unfailingly cherished the ideas of freedom, rights, equality and liberty that keep motivating me to work for a better world. However, my motivation changed through time. When I started as a student activist, it was in a particular kind of state and we demanded for political freedom and democracy; when we had political freedom, we saw the parties or leaders corrupted, and we needed to fight against the wrong doings to protect our political freedom; then as a researcher, I see the importance of the economic, social, and cultural rights of the people.

When I was in resistance politics, the restoration of democracy in 1990 was the defining moment. When I was involved in the land rights movement, the recognition of our work nationally and globally naturally inspired us. The Government inviting our organisation to the policy drafting committee was indeed an inspiring moment. After so many years of struggle, finally the Government recognises the movement and we can communicate the struggles from the landless communities to the policy-making level.

When we are in the movement, every single achievement of the movement is an inspiration for us to continue. Every single news of recognition and securing of the rights of a marginal farmer due to the work of our movement keep us inspired. CSRC is now a member of many international organisations and networks, and those all inspire us to continue our work.

It is very difficult for rights-based movements and organisations, like CSRC, to get funding from donors, because donors want to see ‘tangible’ outcomes, such as physical structures. But for us, when we are fighting for rights, we will never know whether or not we can secure them and how long it will take. A movement cannot be funded, but we need some funds to facilitate the movement. We have to have enduring belief. It is not easy, as we are always targeted. Many land rights defenders are tortured and detained by the police and Government. Sometimes they are displaced from where they live. It is about power and political structures at the local level as well. If we are fighting for rights, there is always someone stopping you from having those rights.

To counter that, we have the land rights forum at village, district and national levels, where thousands of people are organised and mobilised. They even collect funds for the movement. Even if they come from a very poor family, they save up a little portion every day to contribute to the movement fund. The fund is used when they go to the capital or district to join protest rallies. Due to the movement, many farmers and landless people are able to secure their land rights.

When it comes to the harassment of land rights defenders, we first talk to the concerned government authorities, telling them what happened and asking them to intervene. We also visit the districts to show solidarity and to speak for land rights defenders, because very often people from Kathmandu are more influential to speak for people at the local level. In Nepal, everything is controlled by the centre, even though it has become a federal country recently. It is easier to influence the local Government if we can first bring the issue up to the central level. Every year a delegation of landless and marginalised farmers visits different political parties to lobby and ask them to support people whose rights are violated, to make the rights issue a political issue.

Nevertheless, it is not easy to influence the central Government, and it is not their free will to collaborate with us. It is their compulsion to have us in it, as they know the strength of people’s organisation. They have witnessed the protest rally of thousands of people in Kathmandu.

Now there are about 400,000 tenants whose tenancy rights are not recognised, and at least more than 50 per cent of them are in our networks. Almost 28 per cent of the population are landless, and many of them are low-caste. We are with them and for them. Solutions are not easy with limited resources and possibilities, but we still need to fight for their rights. It is the most difficult part.

Landless people in the movement for a long time expect that someday they would achieve something, but if they quit the movement, that is the end. On the other hand, if they remain in the movement, there is hope, but we will never know when that hope can be fulfilled. For us, the burgeoning right wing populist regimes in the region are emerging as a major threat that denies and tends to dismiss any others’ rights than that of the ruling majority.

A better world for everyone of us is not possible unless and until we work for it together. Each of us has to share the responsibility for a better humanity, where each individual has a dignified life regardless of her or his race, ethnicity, caste, colour or gender.

A prosperous society is possible when human rights are considered with utmost sincerity. When there is no respect for the rights of women, men, people with different gender identities, marginalised and indigenous people, then the society is not yet a civilised society. It is always the new generation of people who have taken the lead to create a new world, where human right is regarded a fundamental right of every citizen.  Human right movements are not possible without active engagements of a new generation of people. A new generation has to come forward to take the lead.

No matter which fields you are in – business, academia, industry or political parties – a common agenda should be the promotion and protection of human rights. A better world is possible.