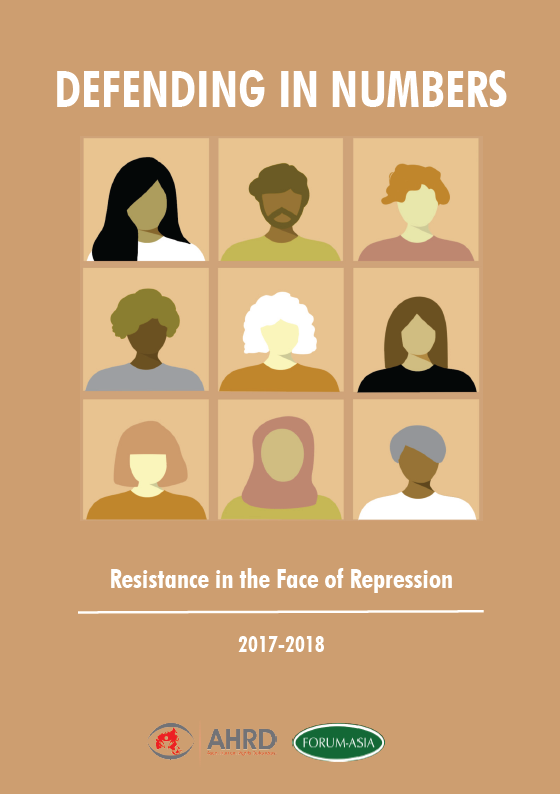 Defending In Numbers is a biennial report that reviews the situation of human rights defenders (HRD) across Asia as documented by FORUM-ASIA. This particular edition of the report, Resistance in the Face of Repression, highlights key human rights violations against HRDs for the period of 2017-2018. Its central purpose is to identify regional patterns of violations and abuses against HRDs to illustrate the repressive environment many HRDs operate in within Asia. It also seeks to present case studies about HRDs that shed light on the important work they have done in advancing human rights, as well as their lived experiences of threats, harassment and intimidation. The information in this publication draws on the data collected by FORUM-ASIA, majority of which are published through the Asian HRDs Portal.

Between 1 January 2017 and 31 December 2018, FORUM-ASIA witnessed the deteriorating situation of HRDs. Violations have become more extreme, and the safe spaces in which HRDs can work have increasingly shrunk. Throughout our discussions with defenders during the 8th Asian Regional Human Rights Defenders Forum4 in 2018, many reported the key challenges for HRDs to be: (i) the arbitrary and abusive use of existing laws; (ii) the passage of new legislation to criminalise activities of HRDs; (iii) the use of intimidation and threats; (iv) the imposition of travel bans, funding restrictions and other restrictive policies; and (v) the use of physical violence, which at times resulted in killings.

In this increasingly repressive landscape, there are small glimmers of hope. For one, HRDs remain resilient in the face of the repression and abuses. They tirelessly defend their rights and the rights of others in pursuit of justice and human dignity. With these defenders’ unfading and enduring resistance, the human rights movement continues to press forward. Secondly, in recent years, as a result of years of struggle by defenders on the ground, there have been historic shifts in the political landscape that has opened up new opportunities for human rights to be upheld. Malaysia, for instance, had its first regime change since the country’s independence in 1957. While South Korea saw Moon Jae-In, a former human rights lawyer and leader of the Democratic Party of Korea, rise to presidency after the impeachment of former President Park Geun-Hye, who was accused of abusing power. In the presence of new leaders, we hope that these countries are offered an opportunity to eradicate its repressive approaches to human rights, and usher in a new era where human rights are respected, promoted and protected.

Finally, it is also a great victory to see more States move towards the establishment of national HRD protection mechanisms. This is particularly the case for Mongolia and the Philippines where – thanks in large part to the prolonged struggle by HRDs – state institutions have finally begun to draft, and hold comprehensive discussions about, national legislation for the protection of HRDs, paving the way for the creation of safer environments for defenders. With 2018 marking the 20th anniversary of the UN Declaration on HRDs, FORUM-ASIA celebrates these achievements, while remaining committed to addressing the dire challenges that remain for HRDs.