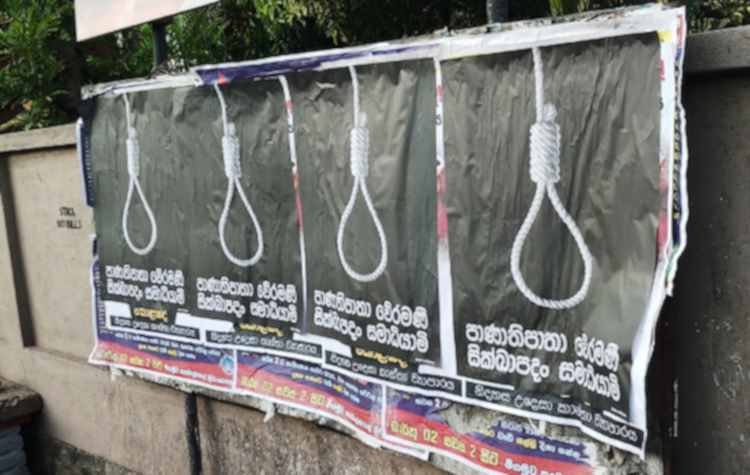 (Kathmandu/Bangkok, 2 July 2019) – The Asian Forum for Human Rights and Development (FORUM-ASIA) strongly denounces Sri Lanka’s intention to reinstate the death penalty, as announced earlier this year by President, Maithripala Sirisena. Last Wednesday, on 26 June, he announced that he had signed the warrants for the execution of four convicted drug offenders. While no exact date was given, the President assured reporters that it would be done ‘very soon.’ The use of the death penalty as a means to fight a war on drugs, not only has proven to be ineffective, it is also a blatant violation of human rights.

These executions will end Sri Lanka’s 43-year moratorium on the death penalty. While it has been given as a sentence over the past decades, for murder, rape, and drug-related crimes, in practice these were commuted to life sentences.

The death penalty has been abolished, either by law or in practice, in the majority of countries around the world. It is considered a violation of the most fundamental human rights, in particular, the right to life, as enshrined in all established human rights instruments, including the Universal Declaration of Human Rights. In December 2018, Sri Lanka was one of 120 countries that voted in favour of a UN General Assembly Resolution calling for a moratorium on the use of the death penalty.

FORUM-ASIA reiterates its earlier call for Sri Lanka to not to resume the death penalty, and urges the President to halt all preparations for the announced executions.[1]

FORUM-ASIA urges the international community to put further pressure on President Sirisena to reconsider his decision to lift the moratorium on the death penalty, and to ensure the country complies with international human rights norms.