From Our Member Association of Parents of Disappeared Persons (APDP), India – A six monthly brief on the human rights situation in Indian administered Jammu and Kashmir (January to June 2019)
30 June 2019 11:49 am 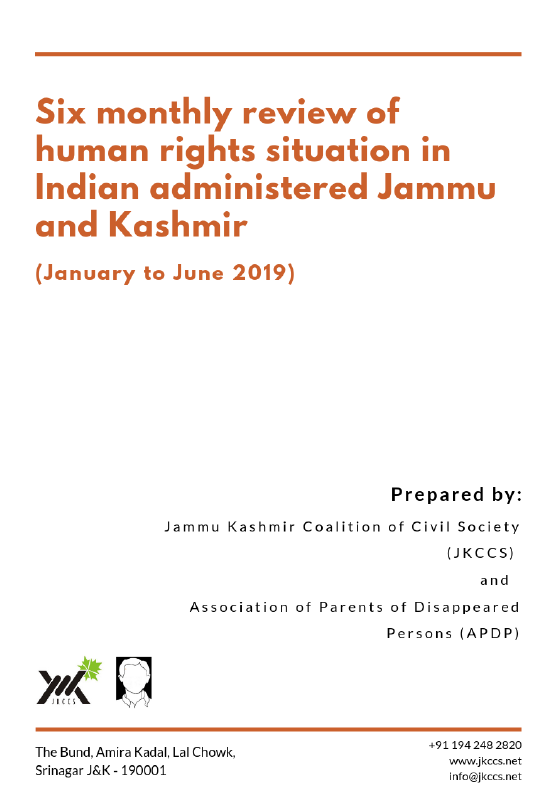 The first half of 2019 in Indian administered Jammu and Kashmir (IAJK) witnessed continued and increased violence and heightened tensions between India and Pakistan following a militant attack on the Central Reserve Police Force (CRPF) convoy on the Jammu – Srinagar highway in February 2019, which led to the killing of 48 Indian soldiers. Following the militant attack on the CRPF convoy, Kashmiris living in various cities and towns of India became targets of hate crimes, forcing thousands of Kashmiri students to flee their colleges and universities in an atmosphere of fear and trepidation. While de-escalation of the tensions between the two countries calmed the fears of a nuclear war, the de-escalation did not lead to any decrease in violence against the people of Jammu and Kashmir – in and outside Kashmir. IAJK continues to be the site of increased violence, frequent Cordon and Search Operations (CASOs), continued use of excessive force against the civilian population, and a complete chokehold on the freedom to express dissent and hold opinions contrary to the policy of the government.

In April and May 2019, elections to the Indian Parliament were held in IAJK prior to which 100 additional companies were deployed in Kashmir, effectively making IAJK the only place in the world where increased military presence ensures the conduct of elections – which are largely boycotted by the civilian population. The polling days witnessed complete shutdowns, violence and also killings. Ahead of the elections, mass arrests of political and religious leaders and banning of religious and political organizations was carried out in IAJK.

While Parliamentary elections were held under heavy military presence in IAJK, the elections to the State Assembly Elections have been deferred. Interestingly, Election of Commission of India’s decision to not announce Assembly Elections in Jammu and Kashmir was based on India’s Ministry of Home Affairs (MHA) assessment of not possessing ‘inadequate security personal’ for conducting elections.1 The admission by MHA effectively shows that elections in Jammu and Kashmir are a military exercise and are only made possible by the massive presence of armed forces on the ground.