Last year, on October 2, Iran executed a 24-year-old woman, Zeinab Sekaanvand[. Born into a poor and conservative family, she was married at the age of 15 to a man who had turned abusive and violent. She appealed to the authorities and her family to protect her from both her husband and her brother-in-law, whom she claimed had raped her repeatedly, but her pleas went unheard. When she was still a child at 17, her husband was found dead, and she confessed to the crime under police torture. At her trial hearing – when she was finally appointed a lawyer – she retracted her confession, but it was too late: the court sentenced her to death. 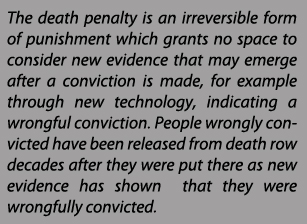 Alice Nungu, was a Malawian woman who was sentenced to death after killing her abusive husband while defending herself and her elderly mother from his drunken attack. In 2015, a court heard about the intense abuse that Alice endured before sentencing, and ordered her release. She had languished on death row for over 12 years, fading from HIV, inhumane living conditions, and lack of food. Only weeks after her release, Alice died, with her mother by her side.

This year, in the United States of America (USA), Charles Ray Finch and Clifford Williams Jr., were exonerated 43 years and 42 years after having been sentenced to death[4]. Williams and Finch were the 165th and 166th persons respectively to be exonerated after being given the death penalty in the USA, over a period of 36 years, an average of more than four exonerations per year.

Sri Lankan judges have been handing down death sentences, with the number increasing from 96 in 2010 to 217 in 2017. However, the last execution was in 1976 and since then, there has been a moratorium on the use of death penalty.

But on June 26, the International day in support of Victims of Torture, media announced President Sirisena had brought back the death penalty, a cruel, inhumane and degrading punishment, breaking the 43 year long moratorium upheld by all Sri Lankan presidents.

The names of the four persons against whom the death warrant has been signed is yet to be announced. As of early this year, 1299 persons were reported to have been on the death row[6]. All those on the death row, and all of their families, must be in agony and trauma, not knowing whether they or their loved ones are amongst the first four to be executed or when their turn might come. Media quoted Prison officials saying most on the death row were stressed, not eating and feeling faintish after the President’s announcement.

Why say NO to the Death Penalty

The death penalty is an irreversible form of punishment which grants no space to consider new evidence that may emerge after a conviction is made, for example through new technology, indicating a wrongful conviction. As has been mentioned above, people wrongly convicted have been released from death row decades after they were put there as new evidence has shown that they were wrongfully convicted.

The Human Rights Commission of Sri Lanka has noted allegations of prosecutorial misconduct leading to conviction of innocents in Sri Lanka. Like everywhere else, wrongful convictions are possible in Sri Lanka, especially given the serious deficiencies in the criminal justice system, including a lack of easily accessible, quality, legal aid for the poor and vulnerable – during trial and appeal. Thus, it is the poor who are more likely to face wrongful convictions.

There is no evidence in Sri Lanka or in any part of the world that the death penalty has prevented or reduced crimes.

It is possible and necessary to oppose the death penalty and support strong measures to address crime, including drug related crimes. It is crucial to work towards prevention of crime, by guaranteeing all human rights for all – both civil and political rights and economic, social and cultural rights.

If some detainees are engaged in drug-related offences from within prison grounds, security in prisons must be strengthened, including through the use of new technology and holding prison officials accountable for allowing drugs inside prisons.

Meanwhile, the Malaysian government is reported to have announced that it is in the process of abolishing the death penalty or scrapping the mandatory death penalty. Nepal’s 2015 constitution has prohibited any law to be made that prescribes the death penalty. Over 170 countries have either abolished the death penalty or taken a position in favour of ending executions by introducing moratorium sin law or practice. As of May 23 2019, 87 countries had ratified the Second Optional Protocol to the International Covenant on Civil and Political Rights calling for the abolishing of the death penalty.The number of countries implementing judicial executions as well as passing death sentences is on the decline. According to Amnesty International, there have been at least 690 executions in 2018, down by 31 percent from 2017 (at least 993 executions). Death sentences passed in 2018 has also declined to 2,531 in 2018 from the 2,591 reported in 2017. At least 19,336 people were known to be under the sentence of death globally at the end of 2018.

As a Catholic, a fundamental precept I believe in is “Thou Shall not Kill”. Pope Francis has said that the death penalty is “an inhuman measure that humiliates human dignity, in whatever form it is carried out” and that it is “contrary to the Gospel.” The Catholic Bishops Conference of Sri Lanka have unequivocally opposed the death penalty through its statement dated August 9 2018. The first precept of Buddhism is to abstain from killings (Pānātipātā veramanī sikkhāpadan samādiyāmi).

The Death Penalty – or Judicial Killings – is against Sri Lanka’s international obligations and religious and spiritual values, which uphold the sacredness of life. We must oppose the death penalty in any form – in the short term to maintain the moratorium, and in the long term to abolish the death penalty for all crimes and ratify the Second Optional Protocol to the International Covenant on Civil and Political Rights which calls for the abolition of the death penalty.

The article was firstly published on the Sunday Observer on 30 June 2019, click here for the source