From Our Member People’s Solidarity for Participatory Democracy(PSPD) and Korean House for International Solidarity (KHIS), South Korea – The Hong Kong Government Must Stop Indiscriminate and Violent Crackdown and Ensure Freedom of Assembly and Demonstration
9 October 2019 2:22 pm 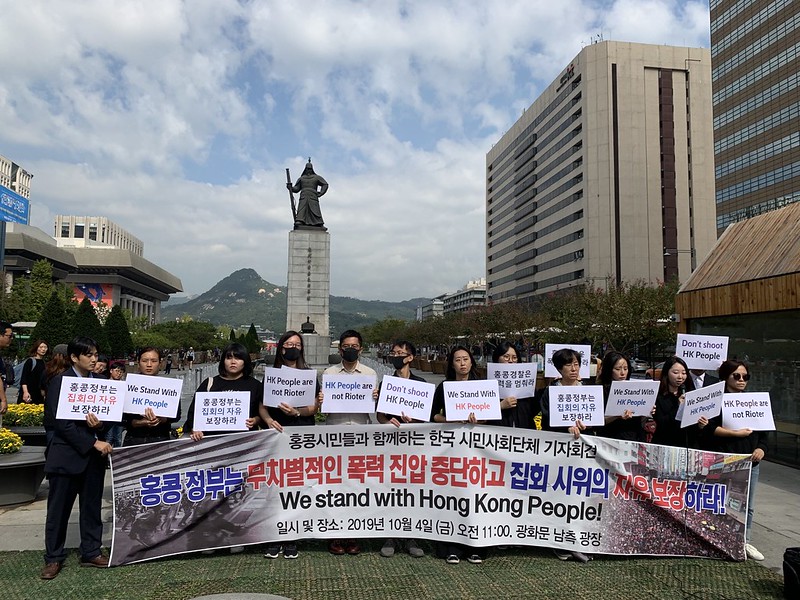 On October 1, the 70th National Day of China, a tragic incident occurred in Hong Kong. On the day that a “Day of Mourning” event was held in honor of those killed by state violence, a highschool student who participated in the demonstration was shot by police. According to the released footage, the Hong Kong police fired live ammunition from a very close distance while confronting protesters, and the student had to undergo bullet extraction surgery. On the same day, the police allegedly fired live ammunition for warning in other areas as well.

The Hong Kong police have admitted to firing live ammunition, but have not made a formal apology. Rather, it is known that they defined the protesters as ‘rioters’ and argued that “police officers at the time felt the threat of life in the situation besieged by protesters and attacked”. The incident is a shocking reminder of the indiscriminate and violent crackdown and the excessive response of the Hong Kong police that have been criticized steadily. The live-fire of the Hong Kong police, which hit the chest just 3 cm away from the heart, is an aggressive and unproportional act that cannot be justified by any word.

Although the Chief Executive of Hong Kong has announced the official withdrawal of the extradition bill, Hong Kong citizens declared their position of continuing their protests until all of the five demands for the official withdrawal of the extradition bill are accepted. The five demands are an independent investigation into the harsh crackdown of the police the withdrawal of defining the protesters as ‘rioters’,  the unconditional release and non-prosecution disposition of arrested protesters, and the direct election of the Chief Executive are accepted. Despite the reduced scale of the protesters, many citizens are still actively joining the protests for Hong Kong’s future and democracy. Amid this situation, Hong Kong citizens’ freedom of expression and freedom of peaceful assembly and demonstration are severely suppressed because of the Hong Kong police’s excessively violent crackdown and ban on rally and march. Since the June 9 protest, which drew 1 million people, the number of protesters arrested by the police has exceeded 1,000, with 66 injured and 180 arrested in the October 1 protest alone. Until now, the Hong Kong police have quelled the protesters indiscriminately by wielding riot rods and firing tear gas and responded excessively by using water cannons, special forces, and even warning shots of live ammunition. The intensification of the protests is due to such excessive responses by the police.

The authorities should not respond to the anger of Hong Kong citizens with violence anymore. The Hong Kong and Chinese governments should face up to the reasons why citizens’ call for democracy and human rights continues even after the withdrawal of the extradition bill, and listen to the voices of citizens who are taking to the streets voluntarily. Prompt response on the government level to the “white terror” which is taking place against citizens who participated in the rallies, as well as the unconditional release and non-prosecution disposition of arrested protesters and an independent investigation into the harsh crackdown by the police, is urgently required. During the process, basic rights such as freedom of expression and freedom of peaceful assembly and demonstration should be ensured above all. Korean civil society organizations pray for the quick recovery of all wounded, including the wounded student, and send the message of solidarity to Hong Kong citizens’ resistance for democracy and human rights.

The statement is endorsed by 65 South Korean NGOs:

***
For a PDF version of this joint statement, click here