On the 10th Anniversary of the ASEAN Intergovernmental Commission on Human Rights, civil society organisations call for it to be more independent and effective
29 October 2019 2:21 pm 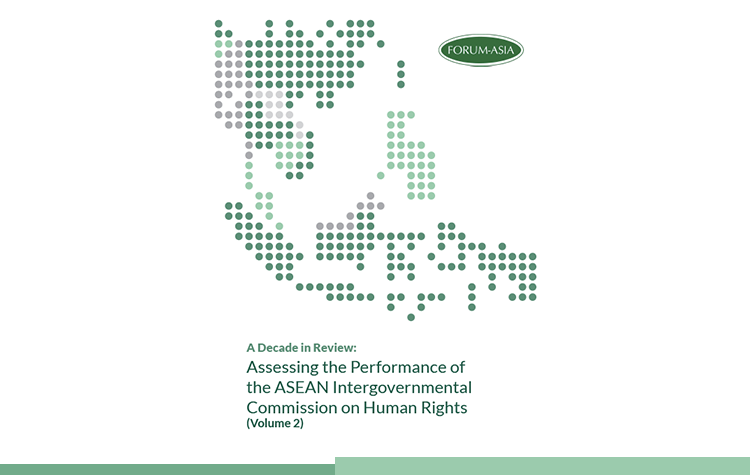 (Jakarta, 29 October 2019) – On the occasion of the 10-year anniversary of the ASEAN Intergovernmental Commission on Human Rights (AICHR), the Asian Forum for Human Rights and Development (FORUM-ASIA) and Solidarity for ASEAN People’s Advocacy (SAPA) have produced two reports, which review how much the AICHR has actually done for human rights in the region over the last decade. The studies conclude that the independence and effectiveness of the AICHR need to be enhanced to fulfil its protection mandate.

Volume one of the reports provides an analysis based on a survey and in-depth interviews of AICHR’s role in protecting and promoting human rights in the region. The second volume is a compilation of essays on key human rights issues and challenges in the region, such as: freedom of the press and of opinion; rights of youths; migration and trafficking in persons; and the absence of progressive human rights instruments in the ASEAN region. The seven contributions have been written by an academician, a Member of Parliament, AICHR representatives, and activists.

As highlighted in the report’s recommendations, FORUM-ASIA and SAPA call on the ASEAN leaders to strengthen the independence and effectiveness of the regional human rights mechanism. Ten years since its establishment, little has been done by the AICHR to truly protect the human rights and fundamental freedoms of the people in Southeast Asia. Amidst the deteriorating state of human rights in the region, it is imperative for the body to go beyond its current modality and show its relevance to the people by actually and effectively addressing human rights violations.

The human rights institution has failed to undertake timely interventions when it comes to various crises, including the repatriation of Rohingya refugees; the longstanding persecution of religious and ethnic minorities in Myanmar; human rights violation in Papua, Indonesia; and the persecution of lesbian, gay, bisexual, transgender, intersex, and questioning (LGBTIQ) people. It has remained silent amidst the rise of populism and the regression of democracy in various Member States. Its silence has affected the fulfilment of human rights and fundamental freedoms.

This inaction and silence stem from the lack of provisions for the protection of human rights in the Term of Reference (ToR) of the AICHR. Additionally, the reality that the body is under the direct influence of ASEAN Member States, has hindered its effectiveness.

A fully functioning regional human rights mechanism must work in complementarity and cooperation with other existing mechanisms, both on a nation and international, as enshrined in the Vienna Declaration and Programme of Action.

The AICHR’s work over the past ten years has deviated from struggles experienced by the people in the region. With that, the AICHR has slowly lost its relevance to its people.

FORUM-ASIA and SAPA call on the ASEAN, particularly the ASEAN Ministers of Foreign Affairs, to take meaningful steps to strengthen the AICHR, starting with the revision of its ToR to include provision for human rights protection and promotion. If the ASEAN leaders are to stand by their commitments to uphold human rights and fundamental freedoms, they need to start to do so by ensuring the people have access to and can rely on an independent and effective AICHR.

Please find a PDF version of this statement here.

The report itself can be found here.