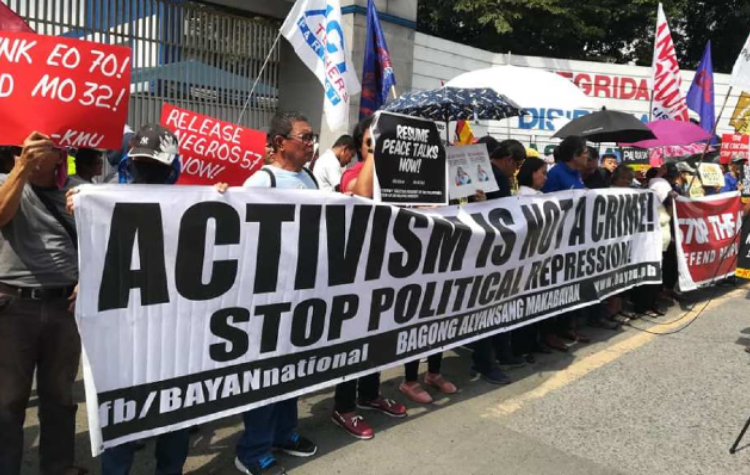 (Bangkok, 7 November 2019) – The Asian Forum for Human Rights and Development (FORUM-ASIA) denounces the recent raids of activist organisations in Manila and Negros Occidental, and the continuous attempts to discredit civil society organisations in the Philippines. FORUM-ASIA calls on the Government and all State agencies to ensure respect for the rights of all individuals involved, including their freedoms of expression, peaceful assembly and association. The Government must ensure transparency in the conduct of its operations and investigations, and ensure that officials are in full compliance of their lawful obligations.

On 31 October and 5 November 2019, the Philippine police and the military conducted raids on the offices of activist organisations Gabriela, Bayan, Kilusang Mayo Uno and the National Federation of Sugar Workers in Manila and Negros Occidental.[1] More than fifty activists, including several minors, were taken into police custody, supposedly for conducting explosives training to destabilise the Government. The police allege that these organisations are ‘legal fronts’ of the Communist Party of the Philippines (CPP) and the New People’s Army (NPA). Security officials also accused humanitarian and church-based organisations, including Oxfam Philippines, on 5 November as legal fronts of CPP.[2]

According to human rights network Karapatan, the police planted evidence during the raids. Karapatan also believes that these series of attacks are reprisals against Duterte critics.[3] Prior to the raids, several civil society organisations received information that they were under surveillance and that a raid of their offices was imminent.

Duterte’s Government has been characterised by the increased and continuous targeting of civil society through the use of repressive legislation, judicial harassment, and accusations of activists being part of the Communist movement, a term often referred to as ‘red-tagging’. FORUM-ASIA has repeatedly raised concerns over the deteriorating democratic space in the country, and the lack of accountability faced by the security sector in their operations, both in its campaign against illegal drugs and its work on counterterrorism. FORUM-ASIA also cautions against the misuse of the national security narrative to silence dissenting voices, which it has seen in the country and in the region.

FORUM-ASIA denounces any and all abuse of power by State officials, and calls on the Government to ensure a credible investigation into the raids. The Government of the Philippines must establish credible justification prior to further raids on offices and homes of activists. State officials have the responsibility to refrain from making unsubstantiated claims and accusations as these risk the lives of the individuals in the organisations and the communities they work with.

Any restriction to or interference with the freedom of assembly and association must be established and justified under international human rights standards. As a signatory to international conventions, including the International Convention on Civil and Political Rights, the Government is obliged to respect the fundamental freedoms of its people.