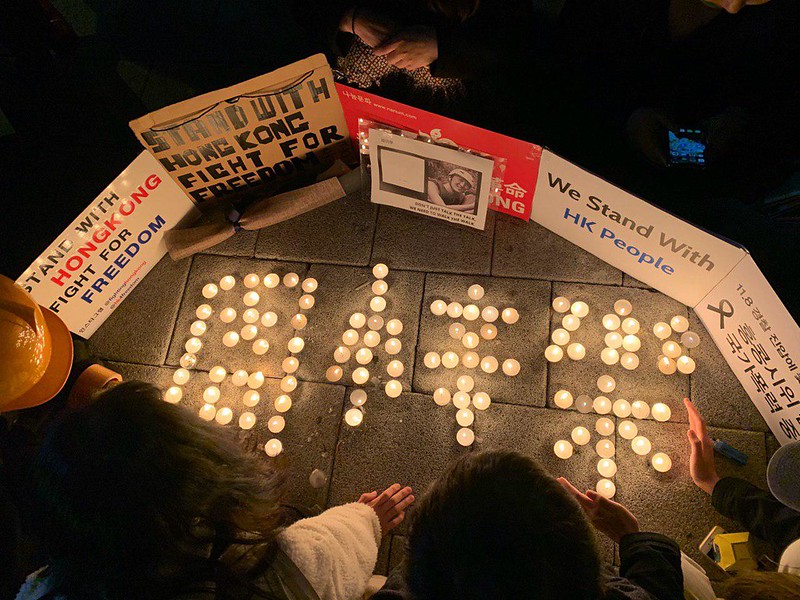 Hong Kong and the Chinese government should stop the indiscriminate violence and establish an independent committee to investigate arbitrary police violence.

We call on the Korean government to declare a position on the situation of human rights violations in Hong Kong.

The current situation in Hong Kong is dire. The protests, which began in late March, have been on-going for eight months. Beyond the amendment to the extradition bill, people are angry with the socio-economic deprivation that resulted upon returning to mainland China and Hong Kong’s democracy is not assured. Yet, they continue fighting for democracy, human rights and the future of Hong Kong. The Hong Kong police have quelled the protesters indiscriminately and violence is breeding violence. In addition, the ‘white terror’ against the citizens who participate in the protests is also becoming serious. Chow Tsz-lok, a Hong Kong student fell to his death in a parking garage trying to avoid tear gas shot by police during the protest of November 4. We mourn the unfortunate death of a young man and grieve for the death of a protester led by the violent crackdown of Hong Kong police.

Hong Kong has continued to suppress freedom of expression and assembly. Hong Kong police have been indiscriminately suppressing the protests by wielding riot rods, shooting tear gas at protesters, and even using water cannons, special forces, and firing live ammunition. To date, the number of arrested protesters has exceeded at least 3,000 with fully 500 indicted. The number of youth under the age of 15 arrested during the protests also exceeded 100.

The ban on assembly and such excessive response of police are intensifying the rallies. Hong Kong and the Chinese government should no longer respond to the anger of Hong Kong citizens with violence. They should the people’s demands for democracy and human rights and attentively listen to the voice of the people.

First, launch an independent investigation committee to investigate arbitrary police violence. There is evidence that the death of Chow was led by the hard-line suppression of police. As there is an eyewitness testimony that the police interfered with the first aid of rescue personnel and blocked the entry of the ambulance into the scene, it is necessary to thoroughly clarify the cause of the death. The Hong Kong government should establish an independent investigation committee to look into any incidents where people were injured or cracked down by the hard-line suppression of police as well as the student’s death.

Second, the district council election scheduled for November 24 should proceed as scheduled. The Hong Kong government is trying to put off the election, where the pro-Chinese ruling party’s victory is opaque, on the excuse of the ongoing protests. It claims that the election can have a setback if the violent protest continues. However, Hong Kong citizens should not be deprived of any opportunities to express their opinions and wrath.

In the meantime, many citizens of Hong Kong hope that Korean citizens who have walked the long path of democratization through the 5.18 Gwangju Democratization Movement, the June Democracy Movement in 1987, and the 2016-2017 candlelight revolution will stand by Hong Kong citizens. Just as the international community expresses interest and support for the country’s pro-democracy movement during the Korean military dictatorship, they are pleading for more interest and support of Koreans for their democratic aspiration. However, the South Korean government has yet to mention the serious situation in Hong Kong.  It is embarrassing to think that Korea, a member of the UN Human Rights Council, has yet to condemn the rights abuses. The South Korean government should no longer be silent about Hong Kong citizens’ cry for democracy. We hope that Korea can be remembered as a country that sympathizes with the pain over the border and is not silent on human rights issues.

We are here today and pledge to stand by Hong Kong citizens and demand:

Hong Kong and the Chinese government should set up an independent investigation committee on the violent crackdown by police.

The Korean government should express its position on human rights violations in Hong Kong.

The statement is endorsed by 67 South Korean NGOs: