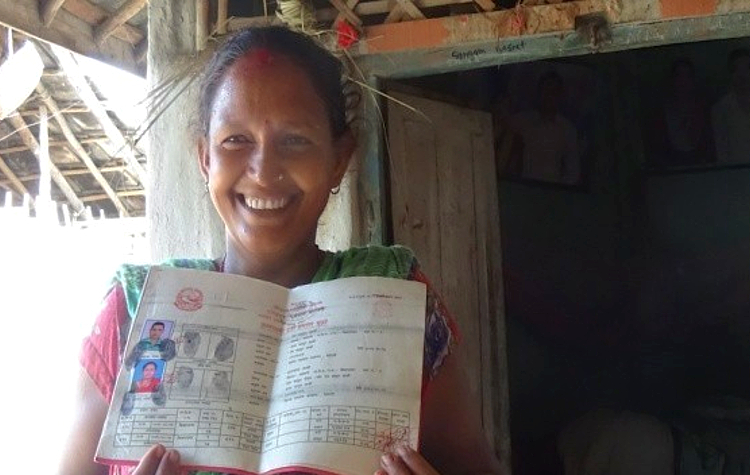 FORUM-ASIA organised its second Global Advocacy Learning Programme (GALP) on Human Rights and Development in Thailand on 27 October – 2 November 2018. Below is a case study written by one of the participants of the GALP in 2018. More information on GALP can be found here.

In Nepal, many women cultivate land, grow different crops, and feed their families. But many of them do not have land tenure. The land they cultivate is registered in the name of male relatives, often their husband or son. The majority of women do not have land ownership in Nepal, with current data showing only 19.07 per cent[2] of women having land titles. The Government has set a provision that if land is registered under female ownership, it will grant up to 50 per cent[3] tax discount.

Because of this incentive, some husbands register properties in their wife’s name, solely to pay less for land registration tax. However, in such cases their wives are most of the time still left out of the decision-making process. A woman’s answer to an interview conducted in Bardiya district is illustrative of this scenario, she shared that ‘one day my husband asked me to pack up all materials in our household. I was totally unaware on what he was telling me at that time. When I reached home, I found that my husband had sold the land (..) I felt totally helpless at that time.’[4]

In the same way, reports have revealed incidents of some young men working overseas, sending their money to their wives, and asking them to buy a parcel of land, effectively registering the property under female ownership. However, this has also led to instances where their wives eloped, and, as a result, the husbands lost all earnings acquired from remittance.

However, there were no laws for ensuring equal ownership of land between men and women in Nepal. In 2006, CSRC started to lobby for the formulation of a government guideline. The Government at the time, however, was not ready to address these issues, saying it would put a burden on couples. Political parties and government officials also resisted, and said that it would be impractical for both husbands and wives to come by land offices to buy or sell land.

CSRC, nevertheless, continued to mobilise small holder farmers in different districts of Nepal, orienting them about the importance of Joint Land Ownership (JLO). A seven-day sit-in protest was organised in Kathmandu in 2016. Around the time of this sit-in protest, two land rights activists lost their wives in a bus accident while they were on the way to take part in the protest. This triggered the Nepalese Government to formulate a guideline on JLO a week after the incident.

The guideline mandates any couple who wants to acquire JLO to pay one hundred rupees as tax, which is less than when males are the title bearers.[5] If there are more than 20 couples who are ready to acquire JLO at the community level, government officials go to their respective communities and grant land certificates to them. It is noteworthy that the Government of Nepal consulted with CSRC before finalising the guideline.

After formulating the guideline, 9005[6] couples have acquired JLO coming to a total of 2488.19 hectares of land as of June 2019. Equal access to land between a husband and wife has also contributed to a healthier relationship, as it provides women with decision-making power in the household. The case study below emphasises this point.

I am Dol Maya Karki. I live in Kisan Nagar of Mahottari district. I was interested in formal education when I was a child, but my parents never sent me to school due to poverty. My parents forced me to marry a farmer, Netra Bahadur Karki of the Bardibas ward-6 Kishannagar of the same district.

Comparatively, my husband’s family was wealthier than mine. They had two hectares of land. However, there was no happiness in my family, because my husband had two mothers and they always quarrelled. My own mother-in-law was not satisfied with my work at home. She always blamed me and did not help me.

The total land of the family was registered under my stepmother-in-law’s name, and because of that she thought she was superior to the rest of the family. She became ill one day, and we were compelled to sell our 0.63 hectares of land for her treatment. But we could not save her. My husband was also not helpful. He was an alcoholic and beat me every day when he was inebriated.

After the death of my stepmother-in- law, my family members divided up her properties, including land. The land we got from the family was registered in my husband’s name. I could not say anything because of fear. I was not happy the land was registered under his name, because he was not a good person.

I knew the importance of JLO from the Village level Land Rights Forum (VLRF) members and requested my husband for the same. Initially, he was not convinced. Then, I shared my problems with VLRF members. They came to my house, talked to my husband and encouraged him to go for JLO. Reluctantly, he agreed.

On 21 May 2017, we acquired JLO from the district land revenue office, Mahottari. Now, we have 0.133 hectares of land. I feel strong and empowered when I got the joint land certificate. JLO was instrumental in making my husband understand that I have a say in important matters concerning the household.

From this case, CSRC learned an important lesson: there should be continuity in action to produce better results. The establishment of community institutions, such as the Village Land Rights Forum (VLRF) sustained advocacy efforts at the grassroots level. VLRF ultimately became the avenue where women could access JLOs.

CSRC believes a JLO helps to empower of both women and men, ultimately enabling them to exercise fundamental rights and freedoms while reducing poverty and injustice.

[1] Binod Gautam is currently a Planning, Monitoring, and Evaluation Coordinator at the Community Self-reliance Centre (CSRC).