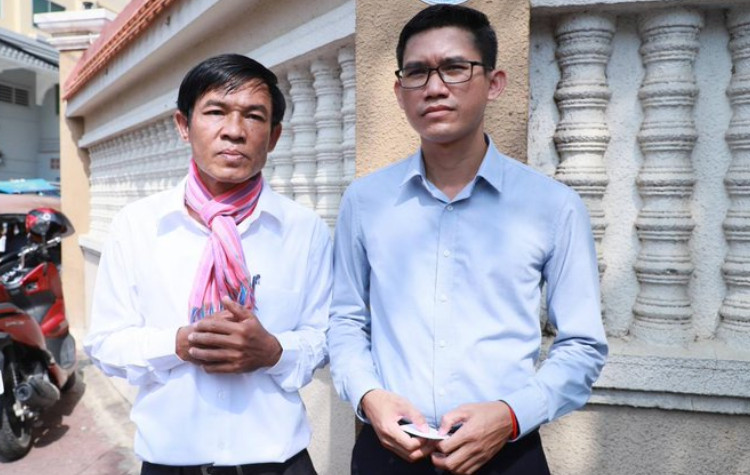 Phnom Penh, 22 December 2019 – We, the undersigned media institutions and local and international civil society organizations call for charges against two former Radio Free Asia (RFA) journalists, Mr. Uon Chhin and Mr. Yeang Sothearin (known as Yeang Sochea Meta), to be dropped. We also call on the government to take immediate action to cease the harassment, arbitrary detention, threat and intimidation of, as well as discrimination against, the independent media.

The two former RFA journalists, Uon Chhin and Yeang Sothearin, were charged by the Phnom Penh Municipal Court with supplying a foreign state with information prejudicial to national defence, under Article 445 of Cambodia’s Criminal Code and with the alleged production of pornography under Article 39 of the Law on the Suppression of Human Trafficking and Sexual Exploitation. The pair were arrested on 14 November 2017 and held in pre-trial detention for nine months. They were released on bail and placed under judicial supervision on 21 August 2018.

On 3 October 2019, the Court announced its decision to continue its investigation, despite the fact that there is a lack of credible evidence against the pair required to hold them criminally liable as per the burden of proof standards enshrined in Article 38 of the Constitution of the Kingdom of Cambodia. Throughout the case of Uon Chhin and Yeang Sothearin, the pair’s fair trial rights have not been upheld in line with national and international law.

We hope that the Appeal Court’s hearing on 23 December 2019, on the charges of production of pornography, as well as the hearing on 20 January 2020 on the charges of supplying a foreign state with information prejudicial to national defence, will provide justice for the pair and the baseless charges will be dropped. It should be noted that according to the summons the facts of the case are going to be heard for the first time in the Appeal Court, constituting a significant and concerning procedural irregularity. The case against Uon Chhin and Yeang Sothearin is one of many in which criminal charges have been used to silence independent and critical voices.

We also call for all charges against Mr. Aun Pheap, and Mr. Peter Zsombor, former Cambodia Daily journalists, to be dropped. On 28 August 2017, after conducting interviews with villagers regarding the commune council elections in Pate Commune, O’Yadav District, Ratanakiri Province, both were charged with incitement to commit a felony under Articles 494 and 495 of the Cambodian Criminal Code, and summoned to appear at a trial hearing on 25 December 2019. The interviews were conducted in their capacity as journalists for the Cambodia Daily, which has since been forced to close due to a tax requirement. The prosecutions serve to further threaten and intimidate other independent journalists.

On 19 November 2019 the Mondulkiri Provincial Court of First Instance summonsed Mr. Sath Chanboth, a journalist for Rasmei Kampuchea and Apsara TV, to appear in court on 2 December 2019, where he was questioned under charges of public defamation and incitement to commit a felony. The summons follows a lawsuit filed by Lieutenant Colonel Sophat Serivuthy, a soldier commander in Mondulkiri. We call for the judicial harassment of Sath Chanboth to be ceased.

In addition to the above cases, we express our concern over the prosecution of Mr. Rath Rott Mony, a translator for Russia Today, and former trade union leader, whose case further threatens the free media. He was accused of incitement to discriminate, and later sentenced to two years imprisonment and ordered to pay 70 million riels ($17,200) in compensation to plaintiffs for his role in supporting foreign journalists to produce a documentary on sex trafficking in Cambodia. His sentence was upheld

in November 2019 by the Court of Appeal at a hearing where none of the plaintiffs or concerned parties were present, undermining the legitimacy of proceedings.

The harassment of journalists also takes other forms. A number of independent journalists have been denied the identification cards necessary to conduct their work. Additionally, some journalists report harassment from their employers for attempting to respect the principle of independence of the media.

We notice that a number of positive steps have been taken by the Royal Government of Cambodia (RGC) recently such as the grant of licence to the Voice of America’s bureau in Cambodia, allowing it to buy airtime from two local radio stations to broadcast its daily news programs, a meeting between Information Minister and RFA’s representative, as well as the decision to provide a licence to The Cambodian Journalists Alliance (CamboJA) on 09 September 2019, an independent journalists network. Despite these steps, journalists still face numerous barriers to conducting their work professionally and exercising their right to freedom of expression.

Chak Sopheap, Executive Director of Cambodian Center for Human Rights (CCHR), adds: “Cases such as these form a pattern of arbitrary and retaliatory prosecutions of critical voices, including those of human rights defenders, journalists, union leaders, community representatives and the political opposition. We emphasise that journalism is not a crime and should not be treated as such. Respecting the right to freedom of expression and ensuring a space in which journalists can conduct their work freely and safely without fear of reprisal are important steps toward building a strong democracy and rule of law.”

We, the undersigned media institutions and local and international civil society organizations urge the RGC to accept our above requests and take concrete actions to ensure that the right to freedom of expression is respected and to create an environment in which independent media and journalists can perform their important role freely.

For a version of this statement in Khmer, please click here.