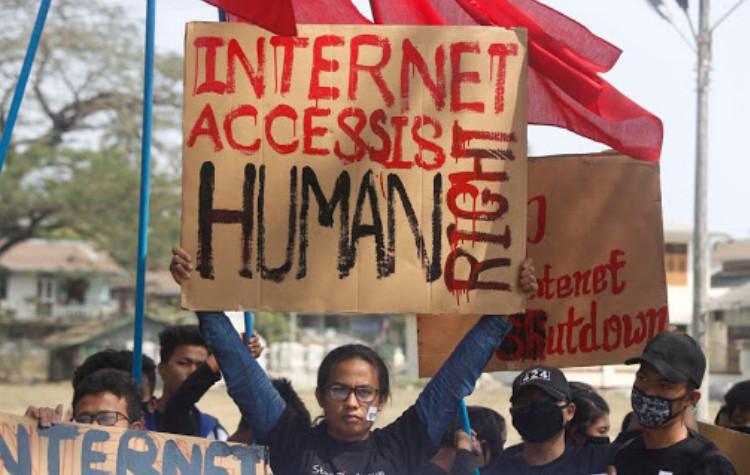 (Bangkok, 27 February 2020) – The Asian Forum for Human Rights and Development (FORUM-ASIA) strongly condemns the charges brought against nine student organisers for staging a protest against the Internet shutdown in Rakhine and Chin townships. The Government of Myanmar should ensure the charges are dropped and reinstate Internet access in the affected townships.

On 23 February, 100 students gathered in Yangon to demand the end of the Internet shutdown in Rakhine and Chin States. Nine student organisers were arrested and charged under Section 19 of the Peaceful Assembly and Peaceful Procession Law, which prohibits unauthorised assemblies.[1] Should they be found guilty, they can face up to six months in jail.

Civil society has continuously raised concerns about the risks posed by an Internet shutdown on people’s lives: hindering humanitarian access; and further obscuring and reinforcing ongoing grave violations, including crimes against humanity and genocide within these conflict-affected areas. The lack a free flow of information compromises the ability of the local and international community to properly document these violations, and to provide adequate and timely interventions.

The re-imposition of the Internet shutdown goes against the International Court of Justice’s ruling, which obliged Myanmar to protect the Rohingya from genocide.[4] The students’ arrests for voicing concerns through a peaceful assembly also highlights the lack of available spaces in Myanmar to voice dissent, despite the country’s supposed commitment to a democratic transition.

International human rights standards state that organisers are not required to obtain prior authorisation to hold an assembly, and that when a notification system is in place, it must facilitate peaceful assembly and ’not operate as a de facto requirement for prior authorisation’.[5] Failure to notify authorities of an assembly does not make an assembly unlawful, and therefore cannot be used as a reason to disperse an assembly, nor as a reason to criminalise the organisers.[6] Article 19 of the Peaceful Assembly Act does not abide by these internationally accepted standards.

FORUM-ASIA calls on the Government of Myanmar to:

Given the country’s continuous shrinking of civic space, FORUM-ASIA urges the international community to stand in solidarity with local civil society through amplifying their demands for the promotion of fundamental freedoms, and to continue to hold the Government accountable for its human rights violations.

[2] The Internet was shut down in the townships of Buthidaung, Kyauktaw, Maungdaw, Minbya, Mrauk-U, Myebon, Ponnagyun, and Rathedaung in Rakhine State and Paletwa in Chin State.

[6] UNGA.’Report of the Special Rapporteur on the rights to freedom of peaceful assembly and of association, Maina Kiai.’ A/HRC/20/27, para 29.