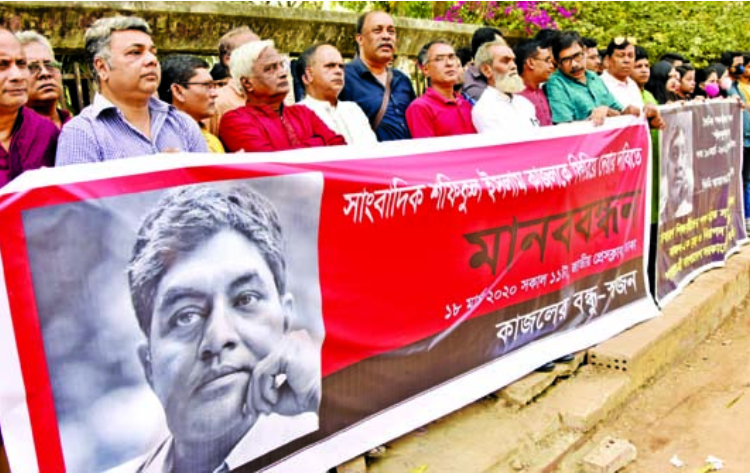 (Kathmandu/ Bangkok, 19 March 2020) – The Asian Forum for Human Rights and Development (FORUM-ASIA) is deeply concerned over the alleged enforced disappearance of Shafiqul Islam Kajol, a Bangladeshi photo-journalist and editor of the Dhaka-based Bangla-language biweekly Pakkhakal.

He has been missing since 10 March 2020.  His disappearance is particularly concerning given the criminal defamation complaint that was filed against him and two other journalists.[1]

The day before he went missing, he and the two other journalists were accused of defamation in a criminal case under the draconian Digital Security Act of Bangladesh. The complaint came from an influential legislator of the governing party.[2] He accused them of producing ‘false, fabricated and defamatory news’ by insinuating he had connections with a female escort service.[3]

Journalists and human rights defenders living in Bangladesh report that they are under enormous pressure to self-censor or risk arrest. The Digital Security Act is being used against dissenting voices to curb freedom of expression in the country. This depicts the worrying trend by the Government of Bangladesh to limit the freedom of expression and target anyone voicing dissent, especially journalists and human rights defenders.

Enforced disappearances are a serious violation of human rights and international humanitarian laws. As is confirmed in Rule 98 of the Customary International Humanitarian Law, enforced disappearances are prohibited. Article 19 of the Universal Declaration of Human Rights further protects the right to freedom of opinion and expression. Freedom of expression is a fundamental human right that must be upheld in any democratic society.

No one should have to fear abduction or being disappeared for what they write. The Government must prioritise any case in which loved ones or family members claim that a victim’s whereabouts are unknown after being taken by security forces.

FORUM-ASIA urges the Government of Bangladesh to take immediate action to ensure Shafiqul Islam Kajol’s safe return. Anything that happens to him will be the responsibility of the authorities. The criminal defamation charges against him and the other journalists should be dropped immediately. FORUM-ASIA also calls for an end to the arrest, torture and disappearance of Shafiqul Islam Kajol and other human rights defenders by means of the Digital Security Act.