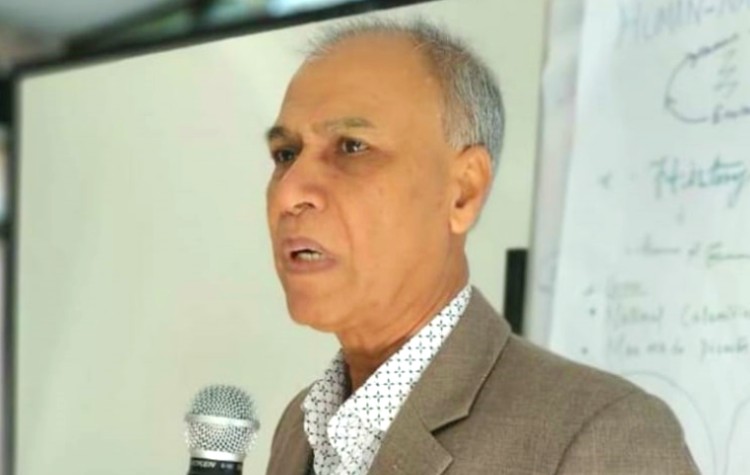 For this month’s e-newsletter, FORUM-ASIA talked with Mohammad Abdus Sabur, Secretary-General of the Asian Resource Foundation (ARF), one of FORUM-ASIA members based in Thailand. In this interview, Sabur shared with us his experiences of working in the development sector in Asia, and shared with us his inspiration from the grassroots communities he works with.

From the early 1980s to 1996 I was the coordinator of the Asian Cultural Forum on Development (ACFOD). It was a forum to support religious-cultural researchers, progressive political agenda, human rights activists and non-governmental organisations engaged in development work. We also worked with   women, farmers, fisherfolk organisations and trade unions from the Asia and Pacific region. ACFOD had more than 200 members across Asia, and some of them are the founding members of FORUM-ASIA.

I have always believed that bringing resources in Asia to support people in need is important for inclusive and sustainable development. Those resources do not only include financial support, but also human resources, religious resources, values, knowledge, and skills.

In 1996, I was one of the initiators of the Asian Resource Foundation (ARF), a platform for interfaith and intercultural cooperation for peace and development. ARF’s programmatic priorities are: children’s education, emergency relief and humanitarian assistance, women empowerment and youth leadership. We also work on building the capacity of small non-governmental organisations and student organisations, through organising seminars and gatherings for them to exchange knowledge and experiences. My idea is that people need to meet, so we are not working in silos, and I want young people to take the leadership and bring this idea forward.

In the mid-1980s, the International Commission of Jurists (ICJ) organised several workshops for rights-based and development organisations in Asia, and I attended some of them. This was when the idea of FORUM-ASIA evolved, and I was part of the process when FORUM-ASIA was formed.

In 2018 ARF became a member of FORUM-ASIA, and we are looking forward to working together with the network and contributing to the human rights movement in Asia.

Being a Muslim, I would like to bring together the Muslim community and explore how Muslim organisations can draw Islamic inspirations and be more involved in the protection and promotion of human rights. Muslim community and religious leaders should be active to promote human rights and inclusive democracy, and to listen to the stories of the most vulnerable and marginalised. We should work together and empower grassroots community to speak up their concern, as no one can do this alone.

Democracy in Asia has progressed, but the impact of conflicts is still severe. For example, the minority communities remain struggling in Ache, Cox’s Bazar, and Kashmir. Human rights need to be addressed in a holistic approach.

My motivation also comes from several role models, who are outstanding persons with the quality, dedication, and commitment to support human rights in the region. To name a few: human rights lawyer Asma Jahangir from Pakistan and Tongbai Tongpao from Thailand; Justice P.N. Bhagawati and Krishna Ayer from India; and human rights activist Dr. Chandra Muzaffar from Malaysia. Each one of them is a role model that inspires me.

My interest has been to create space for marginalised communities that are suppressed by the nation states. Some progress has been made such as the autonomy for Aceh in Indonesia, the recognition of Bangsamoro autonomous region in the Philippines, and the Chittagong Hill Tracts in Bangladesh. But in some other cases situation is worsening, such as Assam, Kashmir, northern Sri Lanka, West Papua, and Afghanistan.

Those places have been affected by conflicts, and people’s voices are not heard nor recognised by mainstream politics. People from remote areas or indigenous communities are often ignored. Those people need to be seen, and recognised by us and the mainstream public.

What do you experience as the main challenges as someone working on human rights ?And how do you deal with such obstacles in your work?

Working in the field of human rights, I have experienced two major challenges. One is the protection of fundamental rights for individuals, especially those who are vulnerable and marginalised. Justice for them is often delayed or denied due to the systematic oppression of the States, which is very structural and adds challenges to our work.

The other one is that the ideal vision of a nation state to respect and protect human rights is not yet realised. States should be responsible for the elimination of all sorts of discrimination, exclusion, and elements of violence, and ensure security and peace for everyone. However, we have not formed a collective movement that is sustainable and able to nurture this transformative change.

We should work together to create a vision that leads to transformative change. Do our part and prepare the new generation to carry forward. I try to practice one thing, that is to make sure young people’s engagement in our work, especially the vulnerable community. Maximise the representation of people who would otherwise not have the opportunity to be part of our work, then they can be capacitated to take up an active role at different levels. Put people at the centre of agendas, bring their experiences to the parliament, and we can encourage others to do the same.