‘I saw how students from other schools were forced into prostitution…’ – Interview with Judy A. Pasimio, Coordinator of Purple Action for Indigenous Women’s Right (LILAK)
13 May 2020 10:14 am 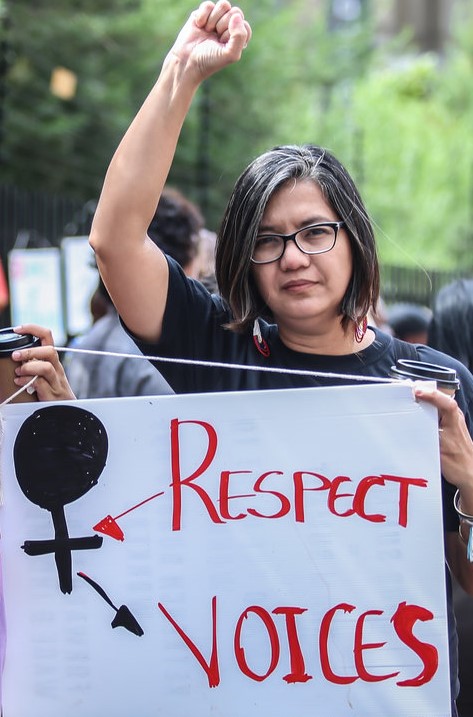 For this month’s e-newsletter, FORUM-ASIA talked with Judy A. Pasimio, a founder and Coordinator of Purple Action for Indigenous Women’s Right (LILAK), FORUM-ASIA associate member in the Philippines. In this interview, Judy shared with us her human rights journey from her childhood, experiences of working with the indigenous women in the region, and the importance of staying connected with the people we support.

I would like to attribute my human rights inspiration to my mom. When Benigno Aquino Jr., the longtime political opponent of Marcos, was assassinated on his way back home from exile in 1983, my mom was so angry, and it was the time when she started to talk about the Marcos’ dictatorship, and that introduced me to the concept of human rights violations.

As I became exposed to the issues of Marcos dictatorship, I joined the high school student leaders’ organisation, it was then that I also became aware of the different realities other than mine, growing up in a sheltered family.

I saw how students from other schools were forced into prostitution to afford tuition fees, and how girls were told by male teachers to lie down to pass the class. These harsh realities made me ask questions and pushed me to find answers. It led me to the path of activism, all the way to the University.

My first job was with the Legal Rights and Natural Resources Center, and we worked closely with the indigenous people. I stayed there for several years.  Then in 2000-2007, I was with the Asian Pacific Forum on Women, Law and Development (APWLD), where I developed my feminism and started getting involved with FORUM-ASIA’s activities. It was a time when women human rights defenders was still a new concept, with then recently passed the UN Declaration on Human Rights Defender. We were in close contact with the human rights defender programme and the UN advocacy programme of FORUM-ASIA for joint advocacy.

LILAK now has seven core staff, and we have a steering committee of 20 indigenous women leaders. We also work with ‘collective sisters,’ who are not necessarily indigenous women but are willing to contribute in different levels.

As an adolescent in high school, I had seen what was unfair, unjust, and not right, and those senses have motivated me to be involved in human right issues. The motivation has not changed, but it has deepened. Over the past 25 years, I have seen how injustice manifests in insidious ways, and brutal forms, especially for women. This motivates me to expose and contribute to addressing it.

The anti-World Trade Organisation (WTO) protest in Hong Kong in 2005 was one of the most inspiring moments for me.  It was inspiring to see how indigenous women from Asia converged with other women from different sectors to take to the streets and fight against corporations and states who wanted to marginalise us, even as they were deciding on matters which would affect our ways of life and our lives.

We knew, and the indigenous women knew that we would be able to resist against WTO when we were a collective. This is the beauty of movement-building. With APWLD, we mobilised around 40 women from eight Asian countries to join this.

Another inspiring moment was the State of the Indigenous Peoples’ Address (SIPA) in 2018, which was a gathering of indigenous leaders to coincide with the President’s State of the Nation Address. There were lively discussion and agreements on the different issues that indigenous people experienced, such as land grabbing, climate change, and poverty.

However, indigenous women leaders who were part of LILAK’s collective raised issues of violence against women, and how the Duterte Government was making it worse; the lack of recognition of women leadership within indigenous communities; and how some of the cultural practices are undermining the rights of indigenous women. This caused quite a stir among the others in the gathering, and even among some indigenous women. But they stood ground and argued passionately. In the end, these issues were adopted in the 2018 State of the Indigenous Peoples’ Address.

I knew then, as I know now that it was very difficult for those indigenous women leaders to speak up and stood their ground, especially in the presence of their traditional male leaders. I am inspired by their courage.

There are so many challenges at different points and different levels, and they change in different phases of my life. I felt more invincible when I was younger; I felt more confident when I married – to another activist.  But now as a mother of a young daughter, there is more fear.

Especially now with the Duterte administration – the threats are real, and they do not have to be directed at me, but just to know that in my circle, threats are prolific and killings can be justified. But we have to be strong-willed and take precaution. That is frustrating, but that is how it is.  And I have to explain to our daughter what and why we are doing – that is the most crucial thing.

At the organisational level, the resource is more restricted now. We want to do more community work and provide more social protection for our LILAK sisters to take care of each other, but funding is not enough for people implementing the projects.

Now, under lockdowns amid the pandemic, LILAK launched the BABAYEnihan (BABAYE means women, and Babayanihan means solidarity in Filipino tradition). This women-to-women solidarity aims to respond to the needs of indigenous women during lockdowns.

With this new context we are in due to the COVID-19, we have to be more creative in our advocacy work, movement-building and capacity development with indigenous women. We have to strengthen our links and our ways of working with our partners on the ground. Meanwhile, we need to think about, and source funds to address the issue of inadequate social protection.

Life can be comfortable, or complicated.  We can live in a small or big circle. We can see things from a certain perspective – upside down, downside up. We can have blinders. But if we close our eyes and feel, we would know that we are not alone. We hear others. We see others. And they are connected to us. That is why we see them and hear them. Once we see them, we cannot un-see the different realities others are in: some are filthy rich, but most are filthy poor.

The forms of injustice are simply staring at our faces. And to turn away is just not an option. We need to do what we can from wherever we are, and with whatever we have. As long as it is done within a collective of like-hearted people, reaching out to more collectives, and building on what is being done by others, then we can resist.

As human rights defenders, we are part of the problems for the status quo, and that is good. We need to be a big headache for the corporations, dictators, and authoritarian Governments. To be a bigger headache, we need to work with others, more collectives and bigger movements, to be more effective. More so, to feel less alone, because sometimes it is easy to feel alone in what we do. And that sense of feeling alone makes us weak.

The more we connect with others, with the peoples on the ground who face much more difficult realities that we are in, then we get fuelled, hopefully inspired, and we move on, to cause bigger headache to the powers that be.