From Our Member Cambodian League for the Promotion and Defense of Human Rights (LICADHO), Cambodia – Worked to Debt: Over-Indebtedness in Cambodia’s Garment Sector
29 June 2020 4:16 pm

Tens of thousands of garment workers in Cambodia will struggle to repay microfinance debts during work stoppages and factory suspensions caused by COVID-19, creating a mounting human rights crisis as they struggle to feed their families and hold onto their land under immense pressure from microfinance institutions (MFIs). Without immediate debt relief, many of these workers will resort to selling their land or their homes, eating less food or taking out even more loans to repay their debts. 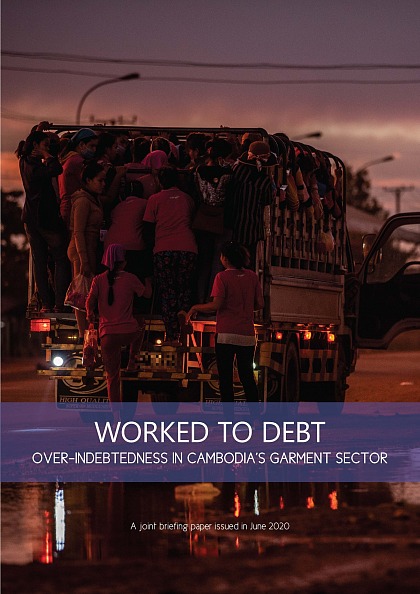 In Worked to Debt, a joint briefing paper between the Cambodian Alliance of Trade Unions (CATU), the Center for Alliance of Labor and Human Rights (CENTRAL) and the Cambodian League for the Promotion and Defense of Human Rights (LICADHO), researchers surveyed more than 150 workers – most of them women – from three factories in Phnom Penh and Kampong Chhnang to investigate how workers were coping with their debts as hundreds of factories suspended operations as a result of the global pandemic.

For years, Cambodia’s lack of a living wage has forced these workers to take on larger and larger debts to survive. Most of these loans were borrowed from MFIs and collateralised with their own or their families’ land titles.

“The fact that so many workers have taken on this level of debt just to cover their cost of living is alarming,” CENTRAL program manager Khun Tharo said. “Getting deeper into debt is just going to hurt those who’ve already been hit hardest by this crisis.”

Two-thirds of those surveyed had taken out at least one microloan from a bank or MFI. The most common reason people gave for taking out this loan was to pay off an earlier debt. Nearly three-quarters of those with microloans were eating less food in order to pay back what they owed.

“Getting deeper into debt is just going to hurt those who’ve already been hit hardest by this crisis.” Khun Tharo, CENTRAL Program Manager

“Garment workers have worked tirelessly to provide food for their families,” CATU president Yang Sophorn said. “Now they can barely afford to feed themselves. Without debt relief or social protections, I’m worried that things are going to get worse and worse for these workers.”

The experiences of these 162 people are not representative of every garment worker or microloan borrower in Cambodia. But we know their struggles are shared by some of the other 2.6 million microloan borrowers in Cambodia, who together held more than $10 billion in microloans at the end of 2019. Cambodia’s average microloan size is $3,804 – by far the highest in the world. During the COVID-19 crisis, many of these borrowers have now been left with no way to earn the money they need to pay back their loans, let alone feed their families or pay basic medical costs amid a global pandemic.

“Garment workers have worked tirelessly to provide food for their families. Now they can barely afford to feed themselves,” Yang Sophorn, CATU President.

While the Royal Government of Cambodian has encouraged banks and MFIs to offer limited debt deferment to selected borrowers, this case-by-case approach to a national crisis is not enough to bring relief to the millions of struggling borrowers. The fact that our researchers have continued to record debtdriven forced land sales throughout this period have made this all too clear.

We call for immediate debt relief programs from both MFIs and the international investors who have spent hundreds of millions of dollars to burden Cambodians with unmanageable debts.

We also encourage the government to expand their borrower protections and enact enforceable, sectorwide regulations, including the temporary suspension of loan repayments and the return of land titles used as collateral, prioritising hardest-hit borrowers such as garment workers alongside vulnerable and impoverished communities and households such as those covered by the IDPoor program.

For decades, garment workers have been the driving force behind Cambodia’s economic growth. They deserve better than a choice between homelessness, hunger, land loss or deepening debt.

For suppliers and the global brands:
•  Set aside an emergency fund to support workers that are suspended.
•  Calculate data on the minimum production loads needed to keep the factory open, as well as on the loss of production capacity and efficiency due to the pandemic and preventive measures.

For the Cambodian government:
•  Ensure that MFIs immediately suspend all loan repayments as well as interest accrual on loans for at least three months.
•  Ensure that MFIs return the millions of land titles currently held as collateral by MFIs to their owners.

For MFIs and banks that offer microloans:
•  Change internal rules to prohibit requiring land titles as collateral for all new microfinance loans.
•  Suspend all microfinance debt repayments and interest accrual for at least 3 months, with the possibility of extension, for all borrowers due to the economic impact of COVID-19.

For international investors and development partners:
•  Cooperate with the Cambodian government and the international development community to establish debt relief programs to ensure MFI clients are not required to sell land in order to repay their debts, with the primary goal of eradicating coerced land sales.
•  Conduct investigation and further, nationwide research into human rights abuses caused by MFIs in Cambodia, and establish regular and robust monitoring mechanisms to evaluate borrowers’ situations in Cambodia.

Listen to the audio version in Khmer.