RMMRU eSymposium on
Hunger, Exploitation, Hate Crime and Xenophobia
Rohingyas on Land and at Sea 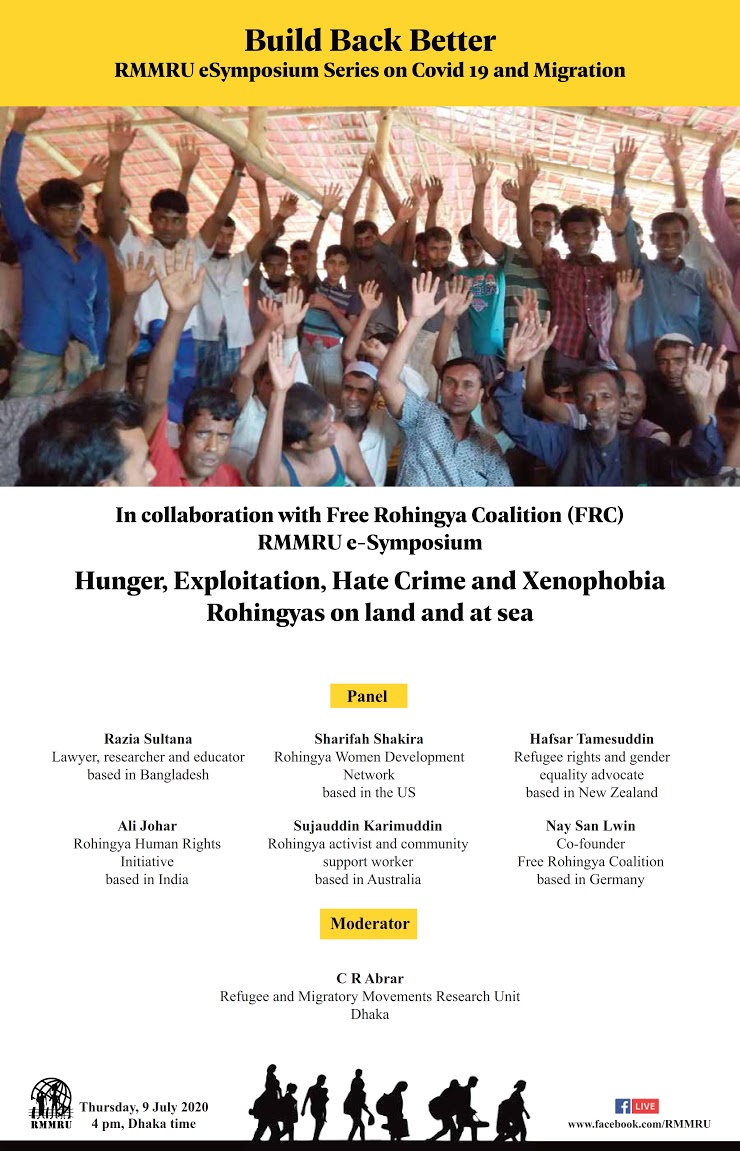 Covid-19 pandemic has disproportionately harmed refugees, asylum seekers and stateless people. The Rohingyas are no exception. The lockdowns and economic slowdown in different countries have robbed Rohingyas of their livelihood opportunities and pushed them into an abyss of hunger and malnutrition. It has also exposed them to exploitation, hate and xenophobia. These observations were made at an eSymposium organized by Refugee and Migratory Movements Research Unit in collaboration of Free Rohingya Coalition held today. Among other things the participants demanded that international community should ensure Myanmar pay appropriate reparations to the countries that are adversely affected by refugee flows. They also demanded littoral states of Andaman Sea and South China Sea to immediately allow the drifting boats to dock on land. Speakers also noted that there is an urgent need that states and donors to recognize the Rohingya community’s agency and create opportunities for self empowerment and entrepreneurship.

Sharifa Shaqira of Rohingya Women Development Network based in United States narrated the plights of Rohingyas drifting at sea. She observed In Myanmar Rohingyas have no future and lead a sub-human life. They are forced to take help of traffickers to escape the atrocious conditions at home, she noted.

Ali Johar from, a cultural activist and youth leader in India highlighted the need for access to education for the Rohingya community. He said in the absence of education an entire generation of Rohingya will grow up illiterate becoming a burden on the host society.

Sujauddin Karimuddin, a Rohingya Community leader in Australia said “being refugees is not our choice; circumstances compel us to move to other lands”. He urged all countries of asylum to allow refugees to live in dignity until they return home.

Hafsar Tamisuddin, Rohingya gender activist based in New Zealand bemoaned that the states and international actors thus far have mainly shied away from calling mass atrocity crime against the Rohingya as genocide and Rohingyas in other lands as refugees. Reminding the audience at one time Rohingyas also owned property and many are educated, she said “what we need is support, not charity.”

Nay San Lwin, Coordinator of Free Rohingya Coalition based in Germany regretted that the UN mandated agency UNHCR in most cases failed to provide adequate protection to refugees and ensure their rights as refugees. They are merely providing services for survival of refugees, he observed.

The moderator of the session, Dr C R Abrar of RMMRU, said that there is little likelihood that UN Security Council will take action against the rogue Burmese state; therefore onus lies on powerful states to impose sanctions on Myanmar. He also called for global civil society to stand in solidarity with Rohingyas to establish their rightful claims to Myanmar citizenship.

eSymposium on
Hunger, Exploitation, Hate Crimes and Xenophobia: Rohingyas on Land and at Sea