‘A sense of ‘hopelessness’ is embedded in society, and human rights defenders often feel alone.’—Interview with Yevgeniy Zhovtis, Director of Kazakhstan International Bureau for Human Rights and the Rule of Law (KIBHR)
6 August 2020 2:08 pm

In this month’s e-newsletter, FORUM-ASIA speaks with Yevgeniy Zhovtis, Director of Kazakhstan International Bureau for Human Rights and the Rule of Law (KIBHR), one of FORUM-ASIA members in Kazakhstan. In this interview, Yevgeniy shares with us his human rights journey as a citizen who witnessed the collapse of the Soviet Union and fought against its authoritarian legacy. 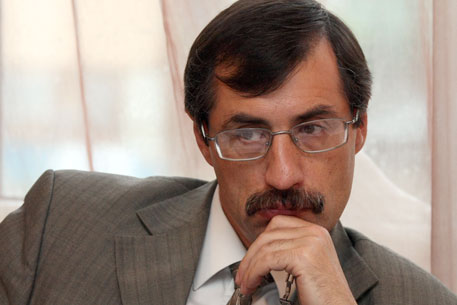 My grandfather was originally from Russia. He was working as the Vice-Minister in the Ministry of Health of the Soviet Union when he was arrested in Moscow in 1938. He was repressed by the communist regime and died in Stalin’s camp in 1942, and that was why my grandmother and my mother tried to hide away by moving to Kazakhstan.

We were against the communist regime because we were fighting for liberty and free choice. In the Soviet Union, any involvement with human rights and civic space was impossible. In 1985, the situation started to change, and the regime eventually collapsed in 1990 and it was then that I changed my profession from an engineer to a human rights activist.

I believe in democracy and human rights, and it was time for me to do something. So, in 1990, I was one of the organisers for the first opposition political party – the Social-Democratic Party of Kazakhstan, and later I became the vice-president of the Confederation of Independent Trade Unions of Kazakhstan.

In 1992, there was an incident that left a mark with me when the special services of Uzbekistan kidnapped one of the participants from the first human rights congress in Central Asia held in Bishkek, Kyrgyzstan. This urged me to challenge these kinds of attacks against civic activists.

It was then that my friends and I founded the Kazakhstan International Bureau for Human Rights and Rule of Law (KIBHR) 27 years ago, and it was officially registered in 1995. Now KIBHR has more than 40 staff, most of whom are lawyers advocating for political rights and civil liberties.

After the Soviet Union collapsed, Kazahkstan became part of the Organisation for Security and Co-operation in Europe (OSCE). At that time, KIBHR focussed most of its advocacy effort in Europe and the US instead of Asia.

When I was in India in 2000, my local friend asked me why was KIBHR not part of any NGO network based in Asia, and it was then that we started to look for more opportunities to get involved in Asia.

As KIBHR is part of an international network called the ‘World Movement for Democracy,’ I discovered that there were many Asia-based organisations that KIBHR can partner and form coalitions. Being part of FORUM-ASIA has added value and complements our work and our advocacy efforts through geographical representation.

When I lived in the era of the Soviet Union, half of my life was under its totalitarian regime. It was a life choice and a decision we had to make: whether to fight its legacy or to continue to live with it. I chose the former because I am a firm believer in the values and principles ingrained in the Universal Declaration of Human Rights.

Throughout the years, I have learnt through our achievements and limitations, I have become more realistic, rather than just being idealistic. But my motivation has never changed because there is no alternative to justice, freedom, the rule of law, equality, and human rights.

If you believe in something and you feel that you must do it, then do so with a conviction!

The execution of a 20-year-old young man in the mid-90s was a shocking episode that pushed me forward to continue my work. This man was sentenced to death for allegedly killing two people – a case involved with fighting in a crowd, which I believed should not have led to capital punishment.

I appealed to the court, hoping to save his life, and I sent a letter to Amnesty International. Sadly, the government decided to execute him earlier than planned to avoid pressure from the international community.

For me, this incident was an ethical dilemma of doing no harm but instead to delve deeper into the systematic causes of injustice. We continued advocating to abolish capital punishment in the country.

In December 2003, President Nazarbayev signed a presidential decree that imposed a moratorium on the death penalty. Since then, no one has been executed in Kazakhstan.

Another achievement we made was when Kazakhstan’s lifted the security procedure for all Kazakhstani travelling out of the country in 2002. There was a time when citizens needed to seek permission from the authorities to leave the country for security reasons, severely hindering freedom of movement.

For this advocacy to be successful, we needed to strategise on best ways to protest against repressive civic space in the country. For example, public campaigns or petitions were not the most effective tactic under the authoritarian regime.

In Kazakhstan, we do not have an influential opposition party that can stand for elections, and we do not have internationally recognised free and fair elections. The government is controlling all media, and even now, human rights activists and journalists are under surveillance.

For an organisation like KIBHR that focusses on political rights and civil freedoms, our challenges have come from the authoritarian regime where surveillance and repression are prevalent.

Our office was burnt down in 1999, I was imprisoned for two and a half years starting from 2009, and we do not feel safe. To counter this challenge, we try to leverage international support, campaign, and push for resolutions in the EU and the US.

Society in Kazakstan is a product of an inherited legacy of the Soviet Union; w where people do not believe in values and freedom. Most people in Kazakhstan do not think they can change their lives, and there is no insight that people can move forward. A sense of ‘hopelessness’ is embedded in society, and human rights defenders often feel alone.

Authorities know how to manipulate this legacy very well, and defenders are subject to bullying, attacks, and are often discredited.

The international political climate adds another layer to our challenges as it has been very cynical and influenced by resources, geopolitics, and security.

However, since 1989, things have begun to change. Before that, no one would have foreseen that one day the Soviet Union would collapse, but it did, and change has happened little by little.

As long as we stay firm and believe in what we are doing, the change will come because there is no other alternative.

Never give up!  Time is our greatest challenge. Very often, we want to see results immediately, but change requires time, and we cannot anticipate or predict the future but change happens out of expectation.

You must believe in yourself, your dignity, and equality. If we keep the belief and values in mind, we are already strong.  Do what you have to do, do not give up, and although it may seem desperate, change will come.