From Our Member Maldivian Democracy Network (MDN) – Status of Selected Recommendations made to the Government of Maldives
9 November 2020 6:42 pm 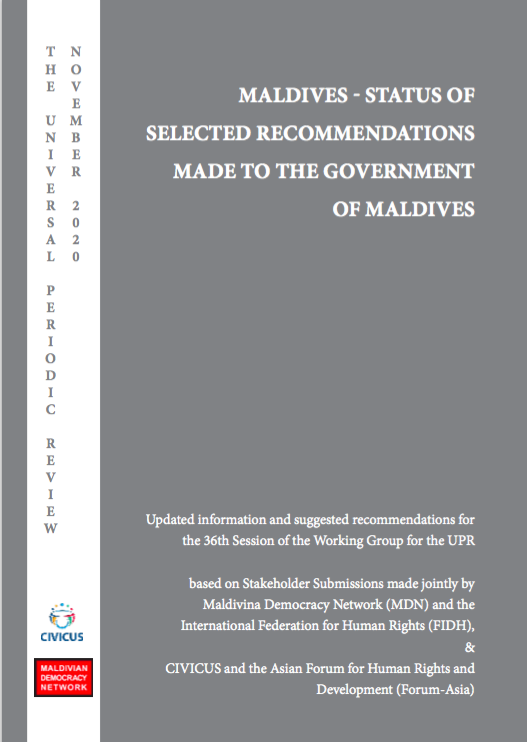 MALDIVES – STATUS OF SELECTED RECOMMENDATIONS MADE TO THE GOVERNMENT OF MALDIVES

Updated information and suggested recommendations for the 36th Session of the Working Group for the UPR.

Based on Stakeholder Submissions made jointly by Maldivina Democracy Network (MDN) and the International Federation for Human Rights (FIDH), & CIVICUS and the Asian Forum for Human Rights and Development (FORUM-ASIA).

The Universal Periodic Review first assessed the Maldives’ human rights situation in November 2010. During the second cycle, Maldives was reviewed on 6 May 2015. e UPR is set to review the country on 4 November 2020. is document contains a brief review of human rights related recommendations made by States during the Maldives review in 2015. A er a period of anti-democratic trajectory from 2012 onwards, a new government was voted in November 2018 with an overwhelming mandate to strengthen and consolidate the State’s democratic systems.

e country is embarking on a renewed process of reforms to the judicial and legal systems. Since introducing democratic reforms in 2008, stringent laws, regulations and policies have continued. Independence of the judiciary by equipping legal and judicial actors with internationally-recognised best practices was also recommended during the Maldives’ review.

Two critical recommendations identified for achieving judicial independence are maintaining the impartiality of the Judicial Service Commission and holding court proceedings with due process guarantees in line with Article 14 of the ICCPR.

Many recommendations concerning the Maldives’ criminal justice system centred on punishments that do not meet international standards. Since the previous government took active steps to resume executions from 2014 to 2018, States echoed the need to abolish the death penalty “definitively” by Maldivian law.

The practice of judicial flogging for sexual relations, which disproportionately impact women, was also raised by States as punishments that “infringe” human dignity and “physical integrity” of individuals.

Recommendations also raised alarms over the rights of religious and sexual minorities, urging the country to adopt measures to provide legal protection and recognition for minority groups. It is worth noting that during the UPR, Muslim-majority states also called on the Maldives to respect freedom of and from religion, creating an equal democratic space for all communities.

Other recommendations addressed the need to increase protections for civil society actors, human rights activists, journalists and lawyers at-risk of political violence, by enacting laws, policies and other mechanisms that combat the root causes.

States emphasised the need for the HRCM to be elevated to the status outlined under the Paris Principles.

The State of Maldives has yet to ratify the Optional Protocols to CRC, CRPD; the Second Optional Protocol of the ICCPR; the 1951 Refugee Convention and its 1967 protocol; and the ICRMW. States urged the Maldives to rescind reservations to Article 18 of the ICCPR, Article 16 of CEDAW, and Articles 14 and 21 of the CRC.

The Maldivian president ratified two human rights treaties in June 2020, namely the Optional Protocol to ESCR and the International Convention on the Protection of All Persons from Enforced Disappearance.

Another shortcoming for the country was the slow progress in reflecting treaties and conventions in Maldivian law, by enacting provisions under the CEDAW, CRC, ESCR, and CAT. Since the last cycle of the UPR, the country has passed legislation in that regard on Sexual Harassment, Domestic Violence, Juvenile Justice and Child Protection.

THE RIGHTS OF THE CHILD, GIRLS AND WOMEN

There were significant concerns raised regarding the situation of children and women. e rights of the child, the girl child, in particular, continue to fall short. Multiple states recommended increasing women’s role in decision-making and peace-building through greater access to political visibility and participation. More excellent representation of women in leadership roles could help combat many gender-based issues the country is facing today.

The COVID-19 pandemic has laid bare the inhumane conditions subjected to migrant workers in the Maldives. Scores of migrant workers of Bangladeshi, Nepali and Indian descent were arbitrarily deported for protesting unpaid forced labour since March 2020.

Despite enacting legislation on preventing human trafficking in 2010, the country is failing to monitor and detect perpetrators systematically, frequently victimising survivors of trafficking through criminal procedures and immigration detention.

Promulgation of laws imposing stricter penalties for fraudulent recruitment and employment law violations, and holding employers accountable for violations, were recommended as solutions. States also urged the Maldives to introduce a national minimum wage, which was introduced in February 2020 but is not in effect as of yet.