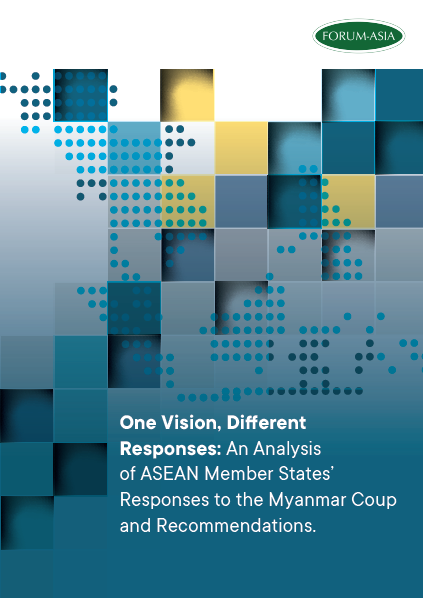 Since the Myanmar military seized power in a coup d’état on 1 February 2021, military forces have arbitrarily arrested, charged or sentenced at least 3,331 people and killed at least 739 others, according to the Assistance Association for Political Prisoners.1 The military is now increasingly repressing independent media through raids, filing lawsuits against reporters, and suspending broadcasting licenses. Millions of civilians continue to protest nationwide in almost every township in Myanmar, despite military intimidation and brutal violence. The Civil Disobedience Movement (CDM) has been joined by workers and senior officials from the civil service, police officers, and the private sector. The coup and crackdown have disrupted the political stability and economy of Myanmar, aside from the devastating human rights violations. It is highly possible that the political and economic destabilisation in Myanmar will have regional and global impacts, resulting in withdrawals and suspensions of investment.

Responding to the situation in Myanmar, ASEAN and its body issued statements and conducted diplomacy to varying degrees. However, none of the interventions made by ASEAN and its Member States during the course of February – March, except for the recent statement by Malaysian Prime Minister Muhyiddin Yassin on 19 March 2021, has addressed the current crisis in Myanmar as a coup. The Chair Statement on the on 1 February has also failed to mention the coup and meaningfully condemn the junta. Furthermore, the resolution issued by the Informal ASEAN Foreign Ministers Meeting (IAMM) failed to meaningfully address the situation in accordance with the will of the people in Myanmar. It did not condemn the brutality of the military junta, support the international community’s efforts to impose targeted economic sanctions on Myanmar military personnel, or call for cooperation with international mechanisms, such as the Human Rights Council and the Security Council of the United Nations. The weak resolution produced by the IAMM embodied the differences of views among the ASEAN Member States on the Myanmar coup. Half of ASEAN Member States, namely Brunei Darussalam, Vietnam, Laos, Thailand, and Cambodia, are firm in their non-intervention approach. They view the Myanmar coup as a domestic affair.

Moreover, ASEAN Member States’ statements at the UN Human Rights Council clearly reflected ASEAN’s emphasis on an approach of non-intervention and reiterated their support for ASEAN’s position, which was outlined in statements issued by Brunei Darussalam as the Chair of ASEAN on 1 February and on 3 March following the meeting of ASEAN foreign ministers. Their statements, beyond general expressions of concern over the use of force against protesters and calls for the release of political prisoners, failed to condemn the military coup or support international action. Instead, ASEAN Member States insisted on dialogue with the Myanmar military to resolve the current crisis, which implicitly legitimises the junta.

Compared with the responses of the African Union and the Organization of American States when dealing with similar crises in their regions, the steps taken by ASEAN to address the situation in Myanmar have been far from optimal. The lack of meaningful action from ASEAN stems from the absence of political willingness to safeguard and enforce the principles under the ASEAN Charter, including democracy, governance, and the rule of law. This failure reflects the differing point of views from ASEAN’s Member States to implement ASEAN’s role under the pretext of upholding an ASEAN way of understanding consensus and non-interference, which also contributes to setting up a weak ASEAN response. Further, although the ASEAN Charter has a decision-making mechanism to address a Member State who breaches the principles enshrined in the charter, it still relies on consensus building. The absence of a stronger institutional framework or mechanism to hold Member States accountable in the absence of consensus, such as a suspension of ASEAN membership or sanction mechanism, has hindered ASEAN’s ability to take concrete action to create hard consequences for Myanmar, its Member State. This absence is the reason for the weak enforcement of the ASEAN Charter.

The coup in Myanmar should be seen as a wake-up call for ASEAN to conduct systematic changes by revamping and strengthening its institutional framework to meaningfully and immediately address the situation in Myanmar. It is also crucial for ASEAN to prepare itself for the apparent trend of backsliding democracy, eroding human rights, political and security instability as a trickle-down effect from Myanmar. Only by undertaking systematic changes, from the Charter to the implementation body, can ASEAN significantly contribute to its people’s livelihood.

1 Assistance Association for Political Prisoners, ‘Daily Briefing in Relation to the Military Coup,’ 21 April 2021, https://aappb.org/?p=14003. The data is from 1 February to 31 March 2021. See the Assistance Association for Political Prisoners website for updated information related to arbitrary detention and casualties in Myanmar.