From Our Member National Commission for Justice and Peace (NCJP), Pakistan – The Cost of Hate Speech: Policy brief for Punajb
5 May 2021 8:14 pm

Our member from Pakistan, National Commission for Justice and Peace (NCJP), released The Cost of Hate Speech: Policy brief for Punjab to understand hate speech and its impact on the lives of minority groups of Pakistan. 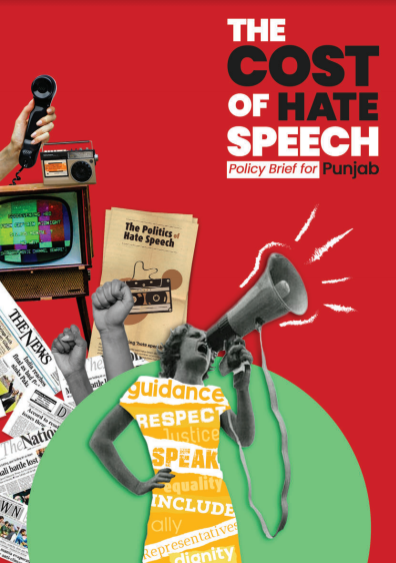 “Pakistan is faced with an unprecedented escalation in hate speech that is creating a climate of fear amongst minorities and an increase in violent religious extremism. Perpetrators of hate speech act with impunity, while those who defend minority rights also become targets of hate and intimidation. Hate has become a key contributing factor in the crimes committed against minorities, and yet, it is frequently met with a lack of accountability. Hate reinforces and exacerbates long-standing marginalization and exclusion, particularly for those who face intersectional discrimination, such as women from religious minorities, and those facing caste-based discrimination.

Besides this, the continuous demand from the religio-political parties to make Pakistan a theocratic state has created space for and given rise to an increasing number of incidents of discrimination, hate speech and violent acts against religious and sectarian minority communities. One extremely important issue that gives rise to such incidents is the blatant use of hate speech within both online and offline spaces (neighborhoods, syllabus, classrooms, public spaces, working spaces, market places, newspapers, public and private literature, as well as social media platforms) in Pakistan, towards citizens belonging to religious and sectarian minority communities, such as Christians, Hindus, Sikhs, Ahmadiyya and Shi’a as well as Atheists (as following no faith renders people equally susceptible to hate speech as those who follow different faiths or faith practices).

This policy brief provides a clear overview of hate speech towards religious and sectarian minorities and its detrimental effects, an analysis of the current legislation in place and a series of recommendations to fill the lacunas in state policy towards hate speech and support the implementation of existing policies designed to prevent it.”