Globe International Center (GIC), FORUM-ASIA’s member in Mongolia, organised an online discussion dedicated to World Press Freedom Day 2021. Below is a recap of the three key issues related to press freedom identified during the discussion. 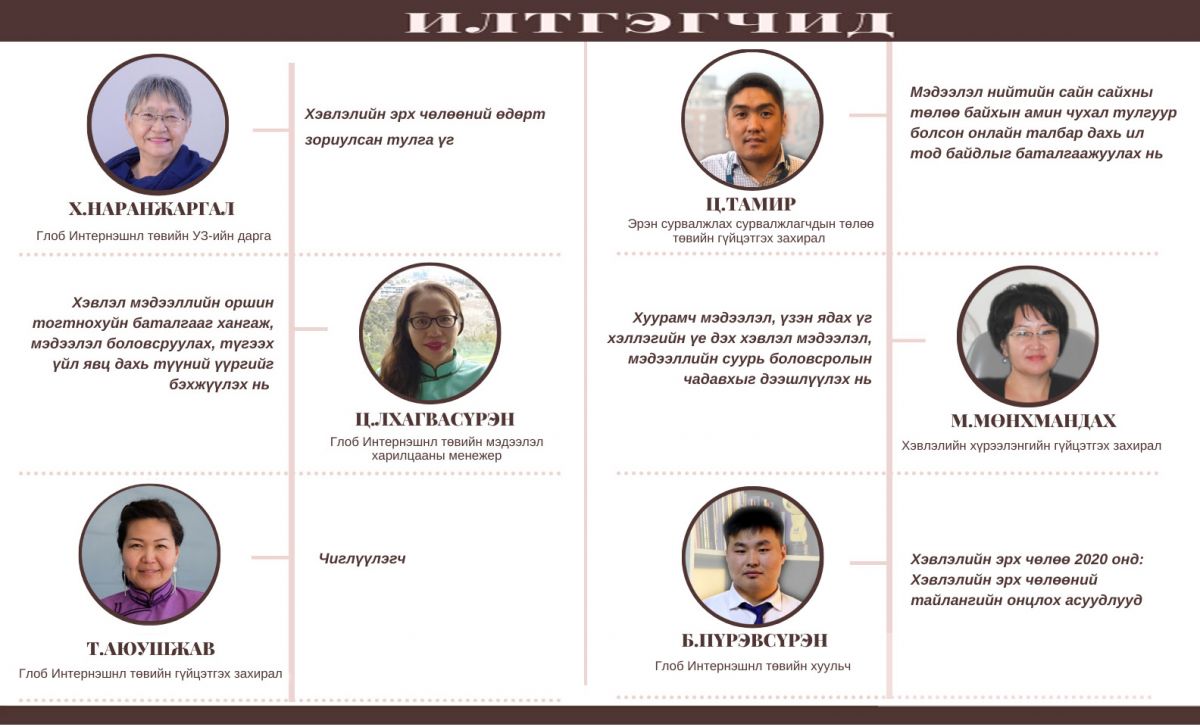 This year’s World Press Freedom Day theme “Information as a Public Good” serves as a call to affirm the importance of cherishing information as a public good and exploring what can be done in the production, distribution, and reception of content to strengthen journalism, and to advance transparency and empowerment while leaving no one behind. The theme is of urgent relevance to all countries across the world. It recognizes the changing communications system that is impacting our health, our human rights, democracies, and sustainable development.

To underline the importance of information within our online media environment, WPFD 2021 highlighted three key topics:

• Steps to ensure the economic viability of news media;

• Enhanced Media and Information Literacy (MIL) capacities that enable people to recognize and value, as well as defend and demand, journalism as a vital part of information as a public good.

Under the global theme, Globe International Center (GIC) and Mongolian National Commission for UNESCO with the support of the UNESCO Beijing Cluster Office organized an online discussion on 3 May 2021. The event was opened by Professor Shahbaz Khan, Director of UNESCO Beijing Cluster Office and Representative to China, DPRK, Japan, Mongolia, and ROK; Mr. Tapan Mishra, UN Resident Coordinator, Mr. Marco Ferri, Chargé d’Affaires a.i. of the European Union to Mongolia and Ms. Uyanga Sukhbaatar, Secretary-General of the Mongolian National Commission for UNESCO. Ms. Naranjagral Khashkhuu, Chair of the Board at the GIC, delivered a keynote speech. The discussion was moderated by Ayushjav Tumurbaatar, GIC Executive Director.

In his opening remarks, Professor Khan highlighted the fundamental significance of press freedom, access to information, and independent and pluralistic journalism in ensuring democracy and all human rights. He further called on all stakeholders to work together, in affirming the importance of cherishing information as a public good, exploring what can be done in the production, distribution, and reception of content to strengthen journalism, and advancing transparency and empowerment while leaving no one behind.

Mr. Tapan Mishra noted that a free, uncensored, and unhindered press or other media is essential in any society to ensure freedom of opinion and expression and the enjoyment of other civil and political rights including the right to information. It constitutes one of the cornerstones of a democratic society, as he emphasized. Mr. Mishra reiterated the importance of having factual and impartial media and journalism in countering the pandemic, promoting inclusion, awareness-raising about climate change, and the wider Sustainable Development agenda.

Mr. Marco Ferri highlighted the EU has done a lot during last year to support and defend press freedom within the EU and beyond. As he said, around the world, the European Union has reinforced its support to independent journalists and media outlets. More than four hundred journalists have benefited from EU mechanisms for the protection of Human Rights Defenders in 2020 and programs supporting journalists, independent media, and the fight against disinformation in the context of the pandemic were launched in many regions.

Ms. Uyanga Sukhbaatar, Secretary-General of the Mongolian National Commission for UNESCO underlined that this day “reminds governments in each country of the need to respect their commitment to press freedom and provides an opportunity for media professionals to reflect on issues of press freedom and professional ethics”. She then highlighted the key themes for WPFD 2021 and reiterated the main points reflected in UNESCO’s Concept note. As she reminded, this theme is calling for uniting to increase the power of citizens and transparency while leaving no one behind during the production and dissemination of content to strengthen journalism in Mongolia. Finally, Ms. Uyanga congratulated on listed at the 68th, stepping up by five positions, for the World Press Freedom Index, if compared to the last years’ positioning.

In her keynote speech, Ms. Kh. Naranjargal emphasized a number of critical points in her opening remarks. First, she urged the Government of Mongolia not to underestimate the professional role of the media while using the FB platform to prevent risks and increase the official information and data. As she exemplified, live streaming on government policies and responses to the pandemic via social networks such as Facebook from governmental agencies/institutes is seen as an effective way but underestimates the role of professional media. Second, she called the government to recognize the role of community radios in the soums (small administrative unit) which are hardly trying to survive, thereby providing policy, regulatory and financial support. It is because of the current lack of legal and policy recognition of community media. Third, she requested the government to promote media diversity or the environment in which commercial, social, and community media work together in an efficient and effective manner, for it is a matter of the efficiency of the whole media ecosystem. Fourth, as she stated, a 2021 survey by the Mongolian Media Council of 300 journalists found that 59 percent of them “have had their press freedom curtailed since the effectiveness of COVID-19 regulations”. Two-thirds of those surveyed said, “All the information they disseminated, and most of it was dominated by official sources.” Finally, as she said, the Government of Mongolia also should review and monitor its responses in prevention and fight DISINFODEMIC including the harsh restrictive provisions on false information of COVID related laws and make sure these laws are not abused to quash the human rights and fair criticism by exercising their rights to information and free expression. She also noted that in countries with a high level of media and information literacy, the prevention of false information is highly effective. “However, we do not have a government policy to support basic media and information literacy.” In this regard, she believes that GoM should consider adopting the public policy on Media and Information Literacy as an efficient way to prevent and fight disinformation and provide financial support.

Three speakers presented on this year’s key issues. Ms. Lkhagvasuren Tserensodnom, Communications Manager at GIC, highlighted two issues in her presentation titled Developing the Viability of the Media and Strengthening their Role in the Production and Sharing of Information. First, the media viability should be viewed and defined not only in terms of economic models, but also in a broader perspective, such as socio-political, communication and network, communities being served, and market conditions. Second, media organizations should analyze their external (political, economic, social, market) and internal (media resources, capacity, management) factors that affect their independence and/or viability, and necessary methods and mechanisms are expected to be identified and implemented accordingly.

In his presentation, Reinforcing the Transparency of Online Platforms, an Essential Pillar for Information to Remain a Public Good, Mr. Tamir Tsolmonbaatar, Executive Director of Mongolian Center for Investigative Reporters, highlighted, first, the importance of “professional editorial team who chase for information, produce and disseminate in a repetitive manner”. He stressed that there is no choice but to accept that. Second, “there is a need to ensure that the content developed by professional editors is not equated with other content and that the media outlet’s credentials are checked”. Third, he warned that Mongolian journalism organizations operating online were themselves “non-transparent”.

In her presentation, Strengthening Media and Information Literacy Capacities in times of Disinformation and Hate Speech, Ms. Munkhmandakh Myagmar, Executive Director of Press Institute of Mongolia highlighted two issues. First, the distinction between professional journalism and advertisement has been blurred, and there are issues such as the distortion of information by media outlets and journalists themselves. Second, the main source of combating dis/misinformation and providing citizens with accurate and reliable information is the need to strengthen the vaccine for independent journalism distortion in order to produce quality information, as well as to build social capacity to combat dis/misinformation. The Government has been regulating against disinformation, yet this directly affects the freedom of expression and speech. “Media and civil society actors should engage in making those regulations properly functioned. However, there is no active collaboration between them”, she stressed.

Mr. Purevsuren Boldkhuyag, the lawyer at GIC, presented the state of press freedom in Mongolia, including media legal environment, cases of violations of freedom of expression, and findings of the survey on civil and criminal defamation cases heard by the Mongolian court in 2020. He also highlighted the responses by the Media Council of Mongolia to ethical violations by media and/or press professionals to emphasize the importance of the media self-regulation context in Mongolia. The other significance of the report is that, as he noted, it included monitoring results on COVID-19 pandemic nationwide regulations, which saw 76 violations of civil and political rights. These issues in detail have been provided in the 2020 Media Freedom Report by GIC.

At the end of the online discussion, the 13th “For the Truth” Media Freedom Award was handed over to Baljinnyam Ganzorig, a journalist with Eagle News TV of the Mongolian Media Company. Ms. Naranjargal while introducing him to the audience highlighted that his coverage revealed many issues and had a huge impact on society.