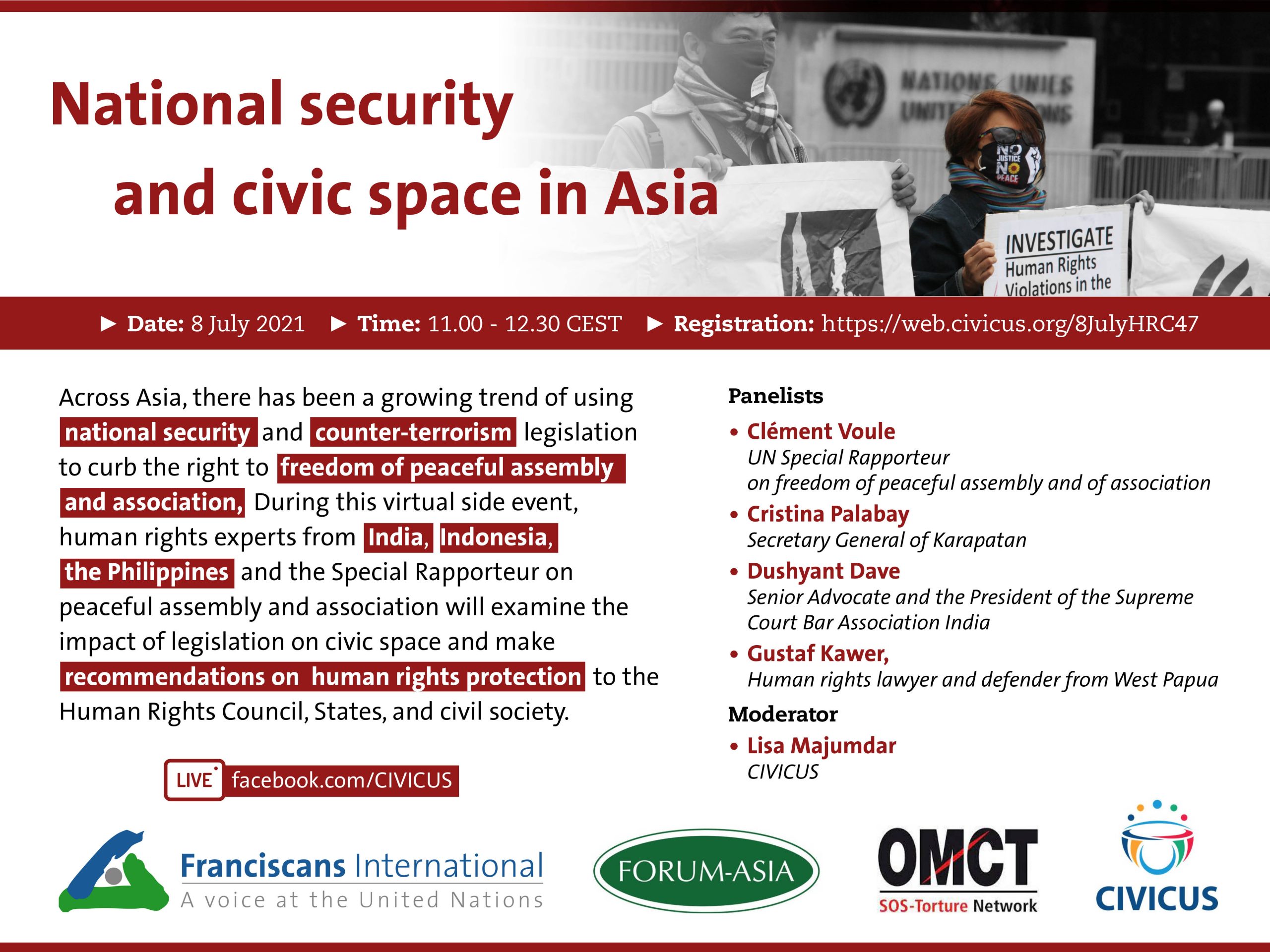 In a report to the UN Human Rights Council in June 2018, the Special Rapporteur on the rights to freedom of peaceful assembly and of association identified the increasing use of legislation, in particular national security and counter-terrorism legislation as one of the growing trends that have contributed to the limitation of the right to freedom of peaceful assembly and of association globally.[1] Three years after the report, the situation has been a proliferation of national security and counter-terrorism laws across Asia, at the expense of fundamental human rights. In several Asian countries, previously guaranteed constitutional and legal protections for freedom of assembly and of association have been completely abrogated or severely curtailed with vague laws and regulations that purportedly protect national security or counter-terrorism. In most of these countries, these laws have been disproportionately used to silence the legitimate work of human rights defenders and civil society organisations and criminalise peaceful human rights advocacy.

In India, a broad range of national security and counter-terrorism laws have been used to arbitrarily to detain, criminalise and impose travel restrictions on human rights defenders and journalists, shutdown internet, and restrict access to resources by civil society organisations.

In the Philippines, the recently adopted Anti-Terrorism Act erodes fundamental freedoms and remove necessary checks and balances with serious threats to civic space, in particular the rights to freedom of expression, assembly and association. Vague provisions in the law solidify the abuse of state power against human rights defenders and civil society. Such powers in the hand of an abusive government such as that of the Philippines which has systematically used terrorist tagging to silence human rights defenders and activists with fatal consequences sound the death knell for civil society.

Heavy militarisation of Papua by Indonesian authorities in the name of national security and counterterrorism continue to fuel violence and restrict the rights to freedom of expression, assembly and association. Indonesia has deployed thousands of police and troops to the region supposedly to quell unrest resulting in violent crackdowns on protests. In an attempt to justify deployment of elite counter terrorism troops in Papua, Indonesian authorities have resorted to arbitrarily labeling of human rights defenders, political activists, journalists and civil society as terrorists, risking further escalations of violence.

In this context, this side-event aims to:

This is a UN side event at HRC47 organised by FORUM-ASIA, Franciscans International, CIVICUS: World Alliance for Citizen Participation and World Organisation Against Torture (OMCT).

For more information or to set up an interview with any of the speakers, please contact Melissa Ananthraj, Communication and Media Programme Manager, FORUM-ASIA at [email protected]