Judicial System Monitoring Program (JSMP) relesaed Overview of the Judicial Sector 2020, a report detailing JSMP’s general observations and analysis of developments and challenges including relevant activities that have taken place in Timor Leste’s justice system in 2020. 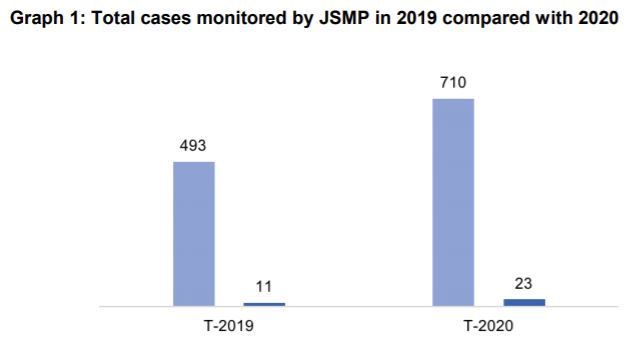 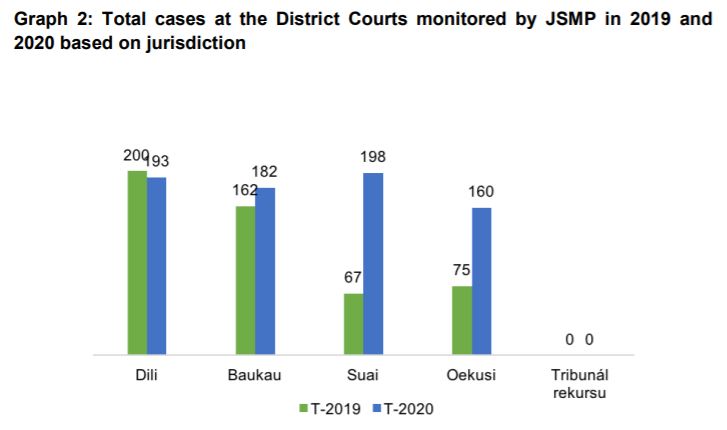 In 2020 the justice sector continued to show some important developments although at the same time the justice sector also encountered challenges due to the political impasse that continued to use the duodecimal budget. Also, there was the
application of a State of Emergency in relation to the Corona Virus Pandemic or COVID-19 for two months, and therefore the courts as well as all institutions could not function as per normal. The courts were only reactivated, or the work of the courts was normalized, at the start of June, however efforts were made to ensure compliance with COVID-19 prevention mechanisms.

Progress was achieved in the justice sector in 2020 with an increase in human resources, namely 13 more staff (3 judges, 5 prosecutors and 5 public defenders), as well as the promotion and allocation of judges and the Oecusse District Court conducted mobile trials. JSMP also noted other important progress, namely the courts tried 6 cases of corruption involving members of government and former members of government.

Challenges faced by the justice sector in 2020 included a decrease in budget for the judicial institutions due to the political impasse and these institutions managed to implement their programs with the duodecimal budget. The Ministry of Justice budget in 2020 was US$11,609,000 which was US$10,374,000 million less than the 2019 budget of US$21,983,000. Therefore many programs were not implemented including a lack of responses to a number of challenges that the Office of the Public Defender encountered, for example transport.

Another challenge was the issue of language and use of non-official interpreters in the courts, as well as the ongoing limited access to the Court of Appeal. In 2020, JSMP managed to monitor cases tried by the Mobile Courts. JSMP managed to monitor 244 cases. The graph below shows the cases monitored by JSMP from 2018 until 2020.

Just like in previous years, in 2020 JSMP observed that the charges of the prosecution in some cases of domestic violence did not select the appropriate article in accordance with the seriousness of the case which resulted in decisions that were inadequate. Prosecutors need to consider the objects used to carry out crimes, such as bladed weapons or pieces of steel, which pose a danger to the health or life of the victim. Also, most cases of domestic violence did not refer to international conventions ratified by the State such as CEDAW and the International Convention on the Rights of the Child.

However, in some cases prosecutors charged defendants with Article 154 of the Penal Code on mistreatment of a spouse. This means that prosecutors are aware that Article 154 of the PC is the more specific article in cases of domestic violence. However, this has been inconsistent, which has created a lot of confusion in practice about which article is more relevant in cases of domestic violence.

In relation to this issue, JSMP again recommends for the Ministry of Justice and the courts to develop guidelines on sentencing in cases of domestic violence with the application of rules of conduct for suspended prison sentences as appropriate and adequate measures to protect against crimes of domestic violence in accordance with principles set out in the Penal Code and the Law Against Domestic Violence.

Cases involving rape are a massive problem for women and girls because they are the victims in most cases. These crimes are complex acts and impede the development of victims because they suffer serious psychological problems and there is the possibility that victims will live with trauma throughout their entire life. This is especially the case when a defendant is closely related to the victim (incest).

Ordering a defendant to pay civil compensation is a means of redressing a victim’s suffering and harm as the result of a defendant’s behaviour that has had a serious psychological effect on the victim. However, in 2020 most cases did not include civil compensation.  Only one case applied civil compensation. Also, JSMP noted that in some cases of rape the prosecution did not charge the defendant with the appropriate articles and only used the article on rape without including the article on aggravation. Also, some cases involved defendants who were responsible for the care of children, including family members or under employment, and the specific article was not used (Article 155 on mistreatment of a minor).

In 2020 JSMP noted that there was a change or some progress in the drafting of charges by the Public Prosecution Service in a case of infanticide, because the indictment did not only charge the defendant, but also charged the man who got the victim pregnant and exerted pressure by instigating the crime of infanticide. JSMP applauds the initiative and good will of the MPs in the National Parliament for approving draft resolution No. 59/V(3rd) on recommendations to the Government to adopt preventative measures in cases on infanticide. JSMP considers that the approval of this resolution will get the attention to all entities, including the Government, judicial institutions, parents, families and churches, so they can take preventative measures, that can reduce the rise in cases involving infanticide and the neglect of babies and children, through the measures recommended in this esolution.

Based on JSMP observations in 2020, the courts continued to face challenges in trials involving disabled persons, for example there were no sign language interpreters, which made it difficult for the courts to establish the facts. Through this 2020 Overview of the Justice Sector JSMP hopes to inform the public about the current circumstances facing the justice sector in Timor-Leste, and progress achieved and challenges.