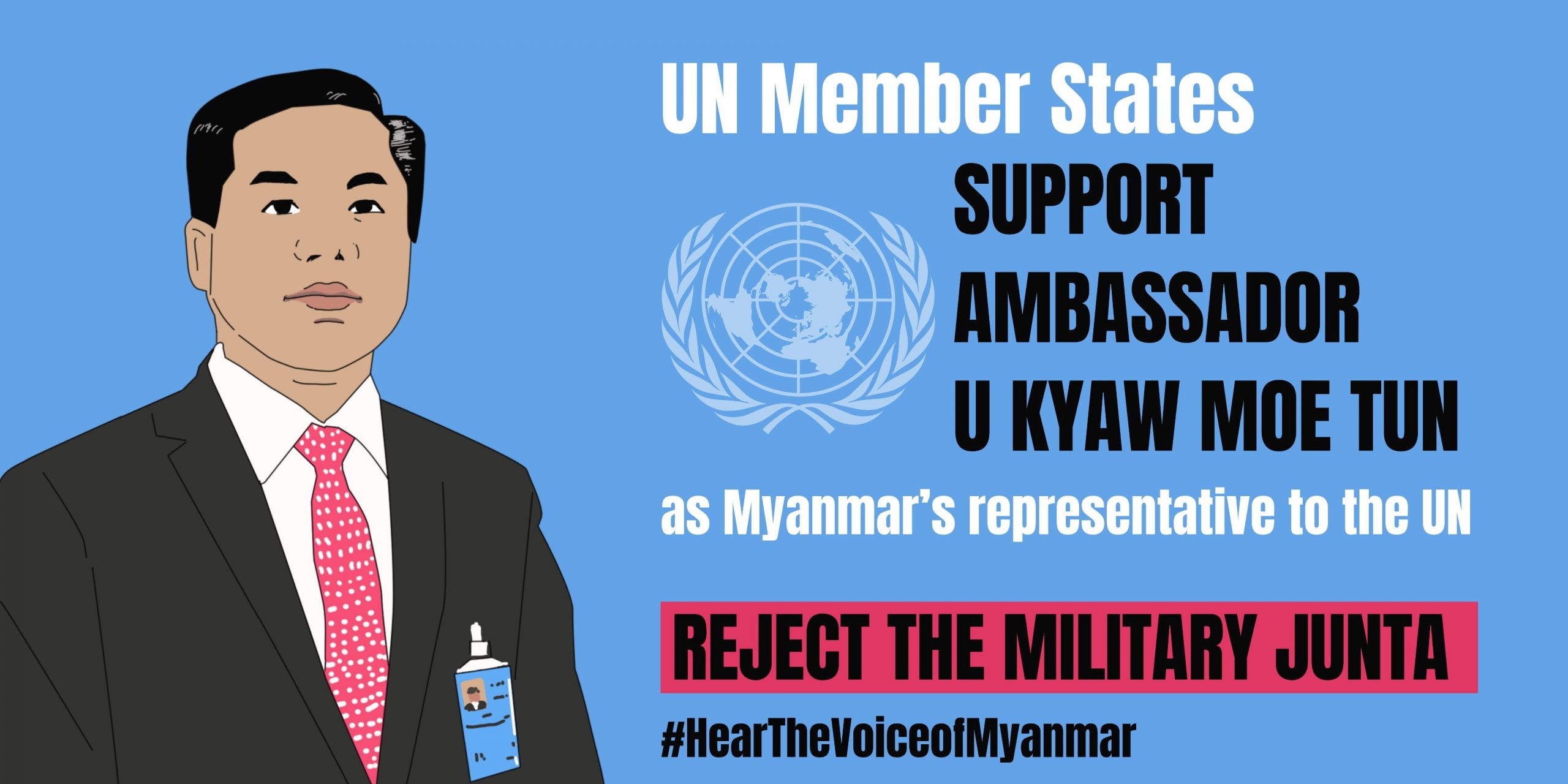 Civil Society calls on UN to retain Myanmar’s Ambassador U Kyaw Moe Tun’s accreditation to the UN, amid fears Myanmar people could be ‘robbed’ of their rightful voice’ by the military junta

[13 September 2021] UN Member States must ensure that the current Permanent Representative of Myanmar to the United Nations, Ambassador U Kyaw Moe Tun, retains his position as Myanmar’s representative to the UN, 358 Myanmar and international civil society organizations said today in an open letter to members of the UN General Assembly.

On September 14, the UN’s Credentials Committee, comprised of nine UN Member States (including China, Russia and the United States), will meet to consider which of the competing submissions – Ambassador U Kyaw Moe Tun or the illegitimate military junta that has attempted a bloody coup since February – should be Myanmar’s representative at the UN. Since the attempted coup, the Ambassador has provided a crucial voice at the UN for the people of Myanmar and their legitimate government, the National Unity Government (NUG). Following its deliberations, the Credentials Committee will submit its recommendations to the UN General Assembly.

Khin Ohmar, founder of Progressive Voice: “There is a real risk that complacency from UN member states could result in the Myanmar people being robbed of their rightful voice at the UN, or even in the military junta receiving official UN accreditation as representatives of the people they have murdered and tortured so mercilessly. We therefore need any UN member state that values humanity, peace and stability, and respects the will of the people, to reject – as the people of Myanmar categorically have – the military junta and its mass atrocities, and take a stand publicly in support of U Kyaw Moe Tun and the NUG.”

Since the February attempted coup, the military junta has killed 1,058, arrested 7,992, detained 6,343 (including 104 children), sentenced 118 people in absentia and 39 people to death in absentia, and has tortured and sexually assaulted countless more. Furthermore, the junta has been unable to establish government functions or take effective control over the territory of Myanmar. Instead of making attempt to control Covid-19, the junta has instead seized medical facilities, hoarded oxygen, persecuting healthcare professionals, and fired on crowds seeking assistance, resulting in an uncontrolled outbreak of the disease that jeopardises global efforts to control it.

Kasit Piromya, a Board Member of ASEAN Parliamentarians for Human Rights (APHR) and former Foreign Minister of Thailand: “The junta is the very antithesis of the UN’s core values of peace, human rights, justice and social progress. Allowing it to sit at the UN would not only undermine any chance of seeing peace and democracy again in Myanmar, but would undermine the credibility of all UN efforts across the globe.”

Dr. Simon Adams, Executive Director of the Global Centre for the Responsibility to Protect: “Myanmar’s military is responsible for genocide, crimes against humanity and war crimes, and continues to kill and arrest its own people for resisting the coup. The UN General Assembly voted in June to condemn the excessive and lethal violence utilized by Myanmar’s armed forces since 1 February 2021 and called upon the military to respect the will of the people. This denunciation sent a clear message from the international community that the actions taken by the junta are contrary to the purposes and principles of the UN Charter. No country should recognize or support the Myanmar’s military junta.”

Further information is available in this factsheet from Progressive Voice and ALTSEAN-Burma.