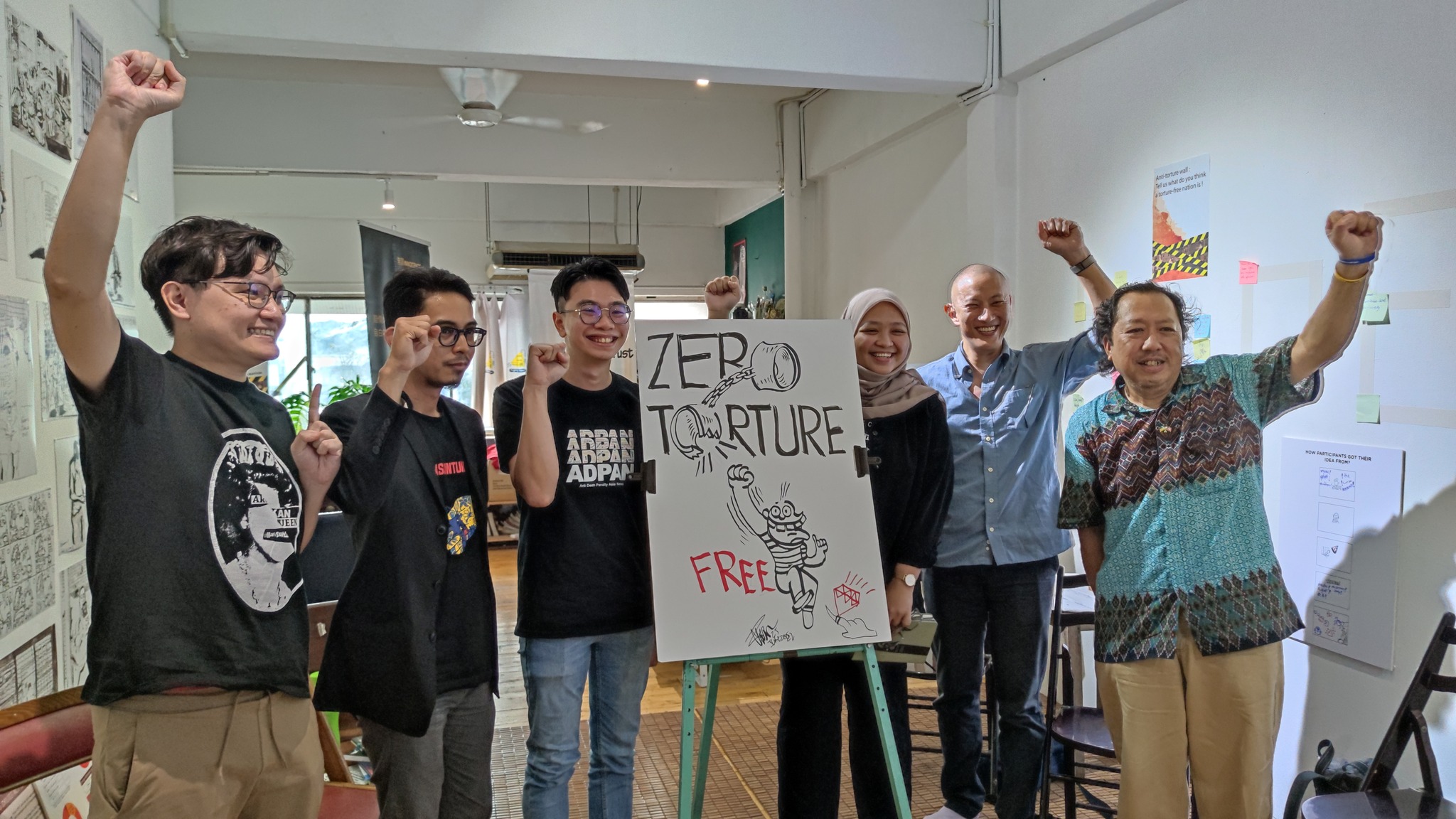 In commemoration of the United Nations International Day in Support of Victims of Torture on 26th of June, Suara Rakyat Malaysia (SUARAM) in collaboration with Association for the Prevention of Torture (APT) and Cross-Cultural Foundation (CrCF) launched an exhibition on torture prevention. The exhibition showcased 30 selected cartoons from a competition for Malaysian youths held in 2021. The exhibition aimed to inspire local artists and youths in Malaysia and Thailand to promote messages of torture prevention through hopeful visual narratives.
The activity is part of a 3.5-year project focusing on reducing risky practices leading to torture and ill-treatment in police custody in Malaysia, Philippines and Thailand.
In addition to the exhibition, other activities were also planned. This included live paintings with two renowned artists from Thailand and Malaysian, Tawan Wattutya and Zunar, a sharing of experience with a former detainee, a public conversation with Cross-Cultural Foundation (CrCF) Thailand on using art to prevent torture and finally a public forum on how to end torture in Malaysia by the anti-torture coalition #ACT4CAT. Suruhanjaya Hak Asasi Manusia Malaysia (SUHAKAM), Bar Council, Amnesty International Malaysia (AIM), Lawyers for Liberty (LFL) and Anti-Death Penalty Asia Network (ADPAN) also opened information booths for the event as a way to promote their own work on preventing torture.
“Re-imagining a Torture Free Nation” was chosen as the event’s theme to encourage the younger generation in Malaysia and Thailand to express their opinions creatively on the importance of preventing torture. The exhibition and related activities set a great example on how efforts to prevent torture can be communicated and addressed creatively.
SUARAM, CRCF and the APT would also like to take the opportunity to welcome the Malaysian government’s recent announcement to abolish mandatory death penalty. The announcement is a step in the right direction towards ensuring that all persons deprived of liberty, especially persons on death row are treated with respect and dignity. In addition to that, Malaysia’s efforts to be part of the upcoming 2022-2024 United Nations Human Rights Council is also seen as an opportunity for the country to invest more in policies and practices that guarantees everyone is safe in police custody.
Related Posts